Nadler: Mueller's Testimony Put On Hold Due To Negotiations 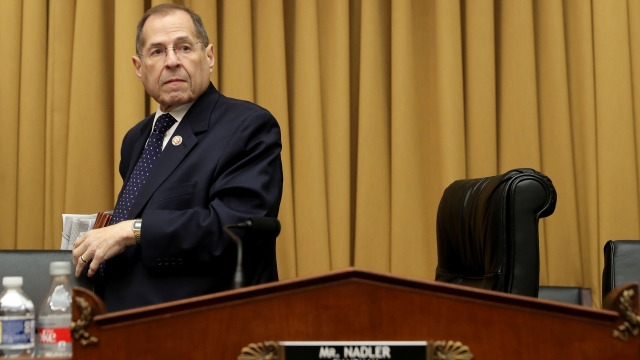 SMS
Nadler: Mueller's Testimony Put On Hold Due To Negotiations
By LeeAnne Lowry
By LeeAnne Lowry
May 11, 2019
Nadler said Friday the special counsel's testimony will be put on hold. Mueller reportedly planned to testify on May 15.
SHOW TRANSCRIPT

Special Counsel Robert Mueller will not testify before Congress next week, according to House Judiciary Committee Chairman Jerry Nadler.

Mueller had reportedly agreed to a May 15 hearing but Nadler says the testimony has been put on hold due to negotiations.

While Nadler didn't give specific details about the holdup, he did indicate Mueller will testify one way or another.

Nadler told reporters: "Eventually we will hear from Mueller because we will, if we have to, we will subpoena him if we have to."

President Trump previously said Mueller shouldn't testify, but he would leave it up to Attorney General William Barr to make that decision. Barr has said he's open to letting Mueller speak to lawmakers.

On Wednesday, the Trump administration asserted executive privilege on the full, unredacted Mueller report and other materials demanded by Congress. That day, the committee voted to hold Barr in contempt of Congress for not releasing the materials. That led to a standoff between two implied constitutional powers — congressional oversight and executive privilege.

"Chairman Nadler is asking the Attorney General of the United States to break the law and commit a crime by releasing information that he knows he has no legal authority to have," Sanders said.

Nadler said the use of executive privilege has created a "constitutional crisis."

Nadler said: "There can be no higher stakes than this attempt to irrigate all power to the executive branch, away from the congress and more importantly, away from the American people."