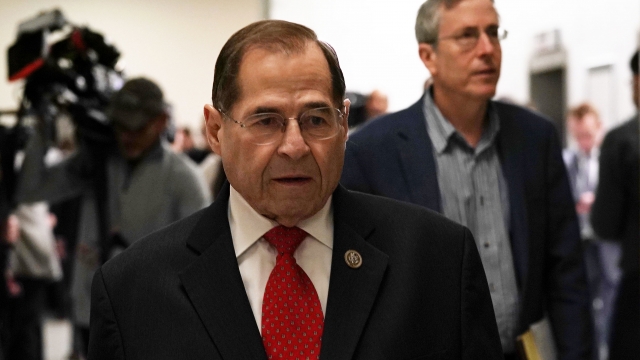 SMS
Nadler Says He's 'Encouraged' By Response To Sweeping Document Request
By Katherine Biek
By Katherine Biek
March 19, 2019
Earlier this month, the House Judiciary Committee requested documents from more than 80 people and groups with ties to the president.
SHOW TRANSCRIPT

The chairman of the House Judiciary Committee said he's "encouraged" by the response the panel received to its sweeping request for documents from more than 80 individuals and entities with ties to the president.

Some of the dozens of people who were sent document requests include the president's two eldest sons, Donald Trump Jr. and Eric Trump; former top White House aides Sean Spicer and Hope Hicks; and the CFO of the Trump Organization.

The committee also requested information from the White House and the Justice Department, as well as the Trump campaign and Trump transition team. All were asked to send over the requested documents by March 18.

In a statement Monday, Rep. Jerry Nadler said a "large number" of recipients had been in touch with the committee, but he didn't specify who'd complied with the deadline.

Nadler told reporters last week that only "a handful" of the individuals and groups were refusing to hand over the requested documents.

It's unclear if the White House is part of that "handful." Earlier this month, press secretary Sarah Sanders referred to the committee's investigation as "disgraceful and abusive."