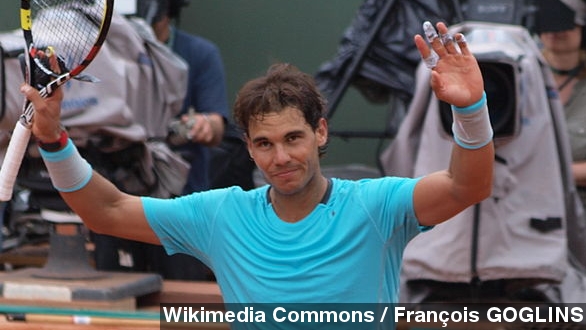 After dropping the first set, Rafael Nadal bounced back and swept the next three to beat Novak Djokovic, earning the swift-moving lefty a record-setting ninth French Open title — and making him the only man to win the tournament five consecutive times. (Via Eurosport)

The two are tied for second and trail behind perhaps Nadal's greatest rival: the "Michael Jordan" of pro tennis, Roger Federer, who's the only man in the tennis history to capture 17 of the coveted trophies. (Via Flickr / Kenneth Hong)

Despite Nadal's complete dominance on the clay surface, the match wasn't predicted to be a shoe-in victory. Djokovic has actually had the Spaniard's number as of late.

In fact, the Serbian won their four previous encounters before Sunday's showdown in what's developed into the hottest current rivalry in men's tennis, though Djokovic was quick to acknowledge Nadal's achievement during his post-match interview. (Via 7NEWS)

"It's incredible to win this tournament for the ninth time. ... I gave my maximum. I played with all my strength and force and capabilities, but Rafa was the better player on the court. Congratulations to him." (Via The New York Times)

The New York Times also points out the 28-year-old would have probably added to his Grand Slam trophy collection at this year's Australian Open had ailing back problems not gotten in the way.

In that match, Nadal was upset by the number three player in the world, Stan Wawrinka. (Via The Guardian)

After Sunday's match, Nadal said the victory was sweet redemption. "It was a very hard moment, so today the tennis give me back what happened in Australia." (Via Los Angeles Times)