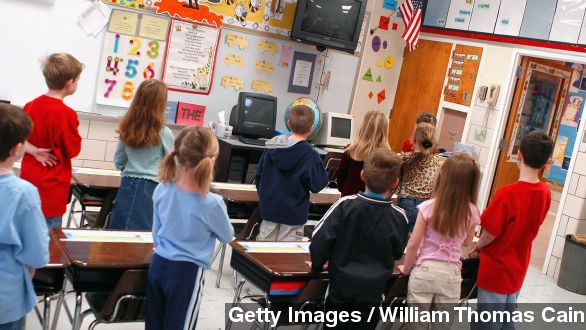 SMS
N.Y. School Backtracks After Reciting Pledge In Arabic
By Jill Ornitz
By Jill Ornitz
March 21, 2015
A high school in New York apologized for reading the Pledge of Allegiance in Arabic. They're not the first school to face backlash for this situation.
SHOW TRANSCRIPT

Administrators at a high school in upstate New York have apologized after a student read the Pledge of Allegiance in Arabic over the loudspeaker.

"I was just like, are you kidding me? That's so disrespectful," a resident told WLNY.

District residents whose family members died fighting in Afghanistan, as well as Jewish residents, say they were offended by the pledge. Some students refused to participate in the reading.

The reading, meant to celebrate National Foreign Language Week, got a lot of conservative media outlets and personalities talking.

What Laura Ingraham didn't mention of course is that free speech is constitutionally protected. So yes, skinheads could say the pledge, too.

And Pine Bush isn't the first U.S. high school to issue an apology following what they called a display of multiculturalism.

One Boston-area school didn't recite the Pledge of Allegiance on September 11 of 2013, but instead read a poem by a Muslim author aimed at promoting cultural understanding. (Video via Cowboy-Bill/CC BY NC SA 2.0)

School officials later apologized to parents and community members and said the pledge wasn't recited because of a scheduling mishap.

Earlier that same year, a multicultural club at a Colorado high school got permission from its principal to recite the pledge in Arabic, French and Spanish.

"I guess I'm getting worn down a little bit by how intense their sense of hate has been represented in some of the things they've written and said," Jackson said in an interview with KUSA.

It's worth pointing out that although critics in New York said the pledge read in Arabic offended them because they'd lost relatives fighting overseas in Afghanistan, Arabic is barely spoken in Afghanistan. The countries official languages are Dari and Pashto.