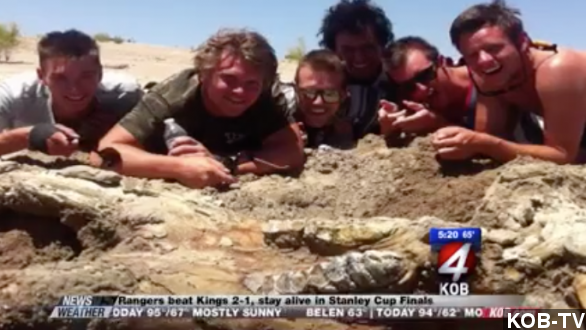 By Brice Sander
June 12, 2014
A group of friends hiking around Elephant Butte Lake State Park found a massive fossil thought to be the skull of a Stegomastodon.
SHOW TRANSCRIPT

Probably the last thing you would expect to happen at a bachelor party is a scientific discovery. But that's exactly what happened in New Mexico.

"As we were coming back down the shore, I see something in the ground."

Antonio Gradillas and his bachelor buddies were hiking around Elephant Butte Lake State Park about 150 miles outside of Albuquerque when they made the discovery. (Via YouTube / Matt Pelletier)

When the guys first spotted the giant fossil, they said they thought it was a woolly mammoth. But when they sent pictures to the New Mexico Museum of Natural History and Science in Albuquerque, the scientists there said it looked more like a Stegomastodon, a 9-foot tall, 13,000-pound, prehistoric pachyderm that roamed New Mexico millions of years ago. (Via Flickr / Flying Puffin, Wikimedia Commons / WolfmanSF)

​Think a jumbo dumbo, or giant elephant — which makes sense; they were at Elephant Butte Lake. KRQE has a closer look at their massive find. (Via Flickr / guido da rozze)

​​"The area has been blocked off so paleontologists can work to excavate the fossil and confirm what it is. The public is asked to stay away and help protect the area."

One of those researchers, Gary Morgan, told CBS he's never seen anything like the fossil in his 30-year career. "(The skull) looks virtually 100 percent complete, a very important scientific discovery that we may put on public display."

Excavation is only expected to take about six hours but will require some pretty heavy-duty machinery. The skull is filled with sand and might weigh as much as 1,000 pounds.