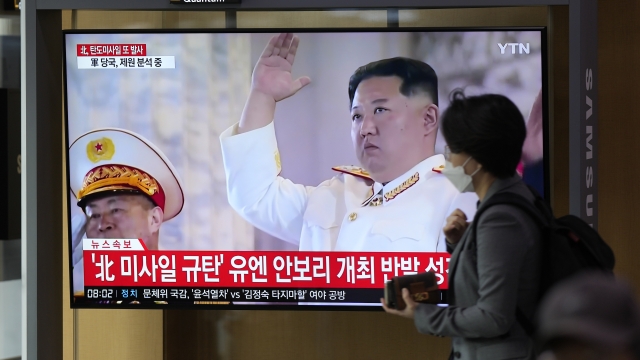 North Korea flew 12 warplanes near its border with South Korea on Thursday, prompting the South to scramble 30 military aircraft in response, Seoul officials said. The highly unusual incident came hours after North Korea fired two ballistic missiles into the sea in its sixth round of missile tests in less than two weeks.

The military said South Korea responded by scrambling 30 fighter jets and other warplanes, though they didn’t engage in any clash with the North Korean aircraft.

The North Korean planes were probably dozens of miles away from the border, South Korean media said.

North Korea has previously sent military aircraft near the border, but Yonhap news agency said this is likely the first time it has mobilized so many warplanes for such a provocative flight and firing exercises.

The U.S. and South Korean militaries are conducting joint exercises to show their ability to deter a North Korean attack on the South.

Tensions have risen sharply on the Korean Peninsula as North Korea’s recent barrage of missile tests prompted South Korea, the United States and Japan to conduct joint drills in response.

Earlier Thursday, North Korea launched two short-range ballistic missiles toward its eastern waters. The launches came after the United States redeployed an aircraft carrier near the Korean Peninsula in response to North Korea's launch of a nuclear-capable missile over Japan earlier this week.

North Korea has conducted a record number of missile tests this year. South Korean officials said the North may further raise tensions by testing an intercontinental ballistic missile or conducting its first nuclear test explosion since 2017, following an old pattern of heightening animosities before trying to wrest outside concessions.

Some experts say North Korean leader Kim Jong-un is determined to expand his nuclear arsenal in defiance of international sanctions. They say North Korea's goal is to eventually win recognition as a legitimate nuclear state from the United States and the lifting of sanctions, though Washington and its allies have shown no sign of doing so.

The latest missiles were launched 22 minutes apart from North Korea’s capital region and landed between the Korean Peninsula and Japan, South Korea’s Joint Chiefs of Staff said in a statement. The first missile flew 217 miles and reached a maximum altitude of 50 miles and the second flew 497 miles with an apogee of 37 miles.

Japanese Defense Minister Yasukazu Hamada said the second missile was possibly launched on an “irregular” trajectory. It is a term that has been used to describe the flight characteristics of a North Korean weapon modeled after Russia’s Iskander missile, which travels at low altitudes and is designed to be maneuverable in flight to improve its chances of evading missile defenses.

The U.S. destroyer is part of the strike group led by the nuclear-powered aircraft carrier USS Ronald Reagan, which returned to the waters in what South Korea’s military called an attempt to demonstrate the allies’ “firm will” to counter North’s continued provocations and threats.

The strike group was in the area last week as part of previous drills between South Korea and the United States, and the allies’ other training involving Japan. North Korea considers such U.S.-led drills near the peninsula as an invasion rehearsal and views training involving a U.S. carrier more provocative.

South Korean President Yoon Suk Yeol and Japanese Prime Minister Fumio Kishida spoke by phone Thursday and agreed that North Korea’s recent missile tests are “a serious, grave provocation” that threatens international peace, according to Yoon’s office. Kishida said the two reaffirmed the importance of the deterrence capability of the Japan-U.S. and South Korean-U.S. alliances, as well as security cooperation among the three countries.

North Korea’s Foreign Ministry said in a statement Thursday that the redeployment of the Reagan strike group poses “a serious threat to the stability of the situation on the Korean peninsula and in its vicinity.” The ministry said it strongly condemns U.S.-led efforts at the U.N. Security Council to tighten sanctions on the North over its recent missile testing, which it described as a “just counteraction” to joint U.S.-South Korean drills.

The United States, Britain, France, Albania, Norway and Ireland called for an emergency meeting of the U.N. Security Council. But the session Wednesday ended with no consensus, underscoring a divide among the council’s permanent members that has deepened over Russia’s war on Ukraine.

Russia and China insisted during the meeting that U.S.-led military exercises in the region had provoked North Korea into acting.