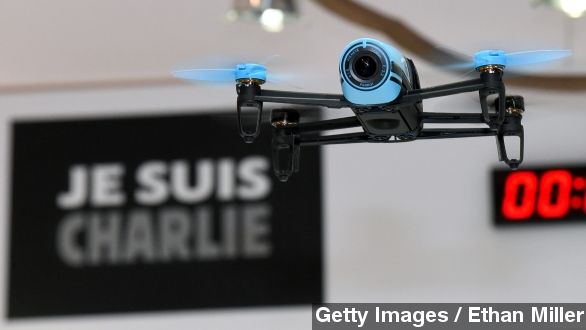 Paris authorities have arrested three Al Jazeera journalists for flying a drone over the city, though the media outlet says its employees were simply trying to cover a rash of other drones flying illegally.

Drones like these need authorization to fly over Paris, but on Monday and Tuesday night, unauthorized drones were spotted several times flying over major landmarks. The drone sightings put authorities on edge in a city where security is already heightened following the Charlie Hebdo attacks. (Video via YouTube / stalin velasquez)

Al Jazeera put out this tweet explaining the journalists' actions, and a Paris police spokesman said there is "no relationship for the moment" between the journalists and the nighttime flights.

Although the drones were peaceful in this case, the mystery surrounding the unmanned aircraft the previous two nights, once again, highlighted their potential security risks.

The unmanned aircraft are small and not easily detected by safety systems. As we saw last month, a drone breached White House security and entered the grounds.

And a drone manned by an opposition political party in Germany landed right next to German Chancellor Angela Merkel during a campaign event in 2013. Merkel seemed to take it as a joke, but it could have been a dangerous situation.

"The main threat they would use is to pack it with explosives and then drive it into something. I think they clearly have that ability, and that would create the shock effect, the terror effect," said Michael Sheehan, NBC terrorism analyst.

Even if authorities identified a drone as a threat, it would be hard to stop it. A former Secret Service agent told CNN shooting down drones in highly populated areas is dangerous for civilians. Instead, other measures have to be used. (Video via Tested)

"The only way to mitigate the threat from a drone carrying a camera or an explosive is to attack it on the RF side, the Radio Frequency side," said Daniel Bongino.

Some cities in the U.S. are starting to put drone security plans in place. NYPD is creating a plan to protect citizens from drone terrorist attacks, and the Army launched a radar blimp over D.C. late last year to watch out for threats, including drones.