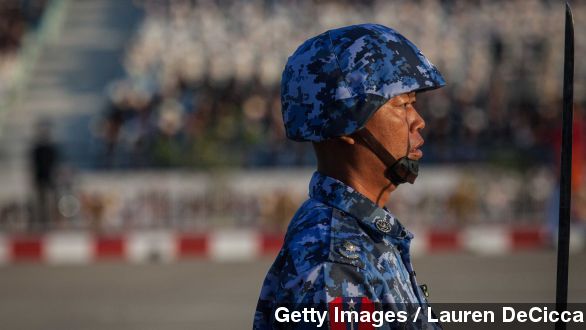 Students protesting for educational reform in Myanmar clashed with riot police after being blocked from marching through the city of Letpadan on Tuesday.

A Voice of America correspondent was told at least 32 people were arrested. Many others, including Buddhist monks, were hit with batons and bricks. Journalists were also reportedly targeted by police. (Video via Voice of America)

Tuesday's violence is the latest in months of building tension after Myanmar's government passed the National Education Law in 2014. The law is criticized for stifling freedom of education by putting the central government in charge of curriculums.

In January, about 200 protesters started a march from the central city of Mandalay, intending to reach Yangon, the nation's former capital. (Video via Eleven Myanmar)

The students are demanding educational reform, including allowing student unions, adding ethnic language classes in schools and ensuring students and teachers have a role in future legislation. (Video via Radio Free Asia)

"They say government and parliament approved a National Education Law, except it was really really centralized by the government. So we don't want that kind of centralization; we want academic freedom," Phyo Phyo Aung of the All Burma Federation of Student Unions told BBC.

On Feb. 11, those demands were turned into an amendment bill, and the march was halted temporarily in Letpadan. But the government stalled and missed a Feb. 28 deadline to pass the bill. So the march resumed.

Except the students weren't allowed to continue. Police barricaded the road, and violence broke out when students attempted to pass.

The clashes are a stark reminder of Myanmar's past, when it was ruled by a military dictatorship for almost 50 years and free speech was harshly suppressed. (Video via Dogwoof / 'Burma VJ')

A little over a week ago, the United Nations High Commissioner for Human Rights Zeid Ra’ad Al Hussein warned that Myanmar seemed to be "headed in the wrong direction and needs urgently to get back on track."

According to Al Jazeera, both the European Union and Interim Myanmar Press Council have condemned Tuesday's violence.