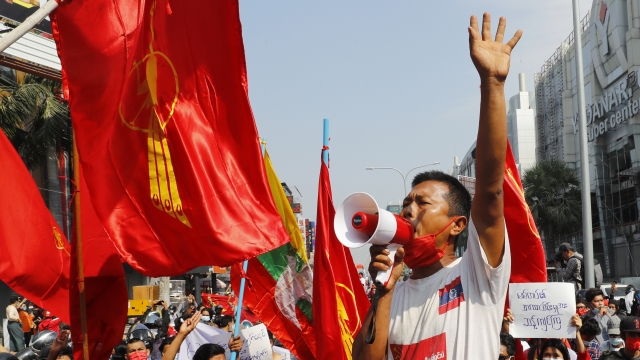 Internet clampdown came as protests over the coup took over the streets of Yangon, Myanmar's largest city.

Myanmar's government issued orders to telecom companies to block access to several social media platforms and the internet this week.

The Facebook shutdown is particularly notable because it plays a massive political and cultural role for residents. There are more than 20 million Facebook users in Myanmar, almost half the country.

"I am Burmese. I speak to members of my family through Facebook. Facebook is effectively the Internet there. It is how they communicate, it is how they get their news," said Eric Naing, media relations officer at Muslim Advocates.

"Most people access the internet through their mobile phones and most mobile phones come preloaded with Facebook. Many people don't use any other browser," said Linda Lakhdhir, a legal advisor for Human Rights Watch Asia Division.

"If you block this, you block a fair amount of regular connectivity," said Chima.

The repeated shutdowns aren’t stopping residents from accessing these platforms.

Moving forward, experts are keeping their eye on whether Myanmar’s military government will continue to throttle social media and internet access for residents.

"It's unlikely that they'll completely shut down networks in total because their own communications also depends on it. Expect to see more shutdowns and disruptions, maybe more localized," said Chima.

"Facebook announced on February 2nd that it was going to take off the platform information that spoke positively about the coup, that it was going to protect the accounts of activists and others who are fearing arrest. That was contrary to obviously the kind of information that the military wants on there. So there's no upside from the military's perspective to allowing Facebook to operate again," said Lakhdhir.