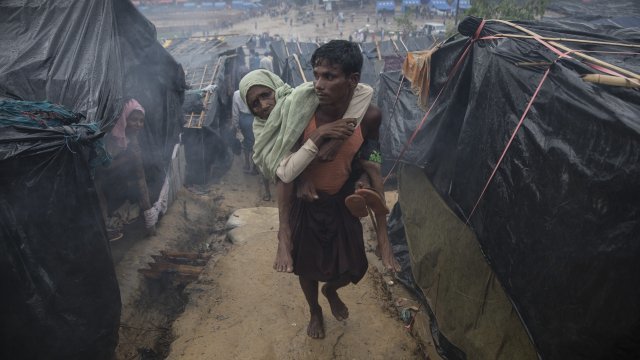 SMS
Myanmar Journalists Reporting On Genocide Claims Sentenced To 7 Years
By Gabrielle Ware
By Gabrielle Ware
September 3, 2018
An activist with Human Rights Watch says the ruling is meant to intimidate to the press from speaking out against the government.
SHOW TRANSCRIPT

Two investigative journalists in Myanmar were sentenced to seven years in prison Monday.  The journalists had been investigating allegations of killings of Rohingya Muslims by Myanmar's government.

The two were charged with the possession of illegal documents under the Official Secrets Act. They pleaded not guilty.

The sentence has prompted international backlash. The U.S. Embassy in Burma tweeted Monday the ruling "is deeply troubling for all who support press freedom and the transition toward democracy in Myanmar."

The U.N. said in a statement, "A free press is essential for peace, justice and human rights for all," and added it's disappointed by the ruling.

And a Human Rights Watch official called the prison sentence a warning from the government to the press.

The organization's deputy director of the Asia division said, "And now what we're seeing is the military and the government, with the court, you know, intimidating ... other journalists by this long sentence against these two individuals."