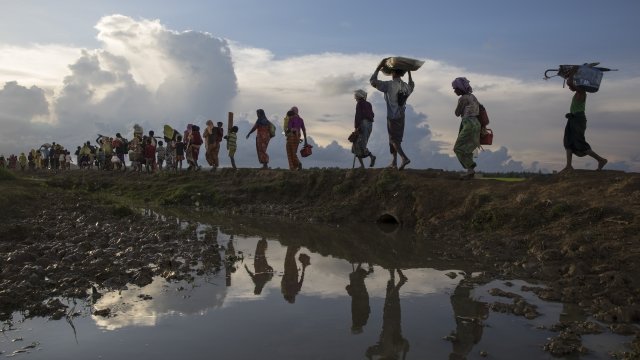 Since August, over 600,000 Rohingya people have fled violence in Myanmar to neighboring Bangladesh.

Bangladesh and Myanmar signed a pact Thursday to repatriate members of a minority group who've fled violence in their home country.

Since August, over 600,000 Rohingya entered Bangladesh after Myanmar's military began what the U.S. State Department called a campaign of "ethnic cleansing."

But a lot of history stands in the way of the deal. Myanmar doesn't consider Rohingya citizens, which might make it hard for those refugees to provide the info and documents they need to return.

Amnesty International says the 1982 Citizenship Act made it basically impossible for Rohingya to register as citizens in their own country. And the organization says in 2016, the government made it even harder to prove one's residency or to register newborns with the state.

Amnesty International says Myanmar refers to Rohingya population as foreigners or Bengalis and won't recognize them as a minority group within the country.

The new Rohingya Culture Center of Chicago is a safe refuge for these persecuted Muslims.

And human rights groups, like Amnesty International, say they aren't sure repatriation is the right course of action right now because of what they call institutionalized discrimination against the minority group.

On Monday, Amnesty released a report on what it says is systematic violence and racism against the Rohingya in Myanmar.

The report found that the country's government keeps a close eye on the Rohingya, limiting their movements, imposing curfews and confining them to villages or displacement camps. The report also says the group has little access to health care, education and even public markets.

It's also not clear what the Rohingya would return to or how many would want to go back. Potentially hundreds of Rohingya villages have been largely destroyed in the ongoing violence, and Rohingya refugees have reported mass murder and rape back home.

Details about the repatriation pact haven't been released, but Myanmar's officials call it a "win-win" for both countries.