#MuteBuck Could Take Some Stiffness Out Of America's Pastime 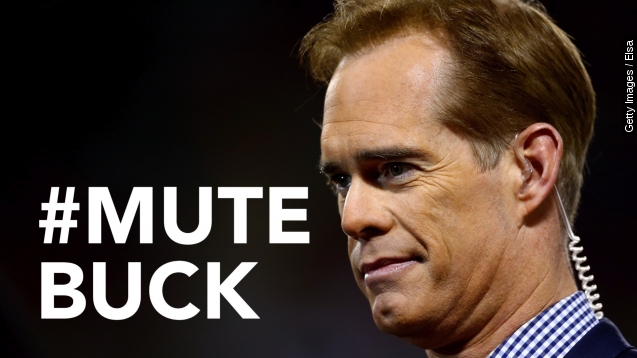 SMS
#MuteBuck Could Take Some Stiffness Out Of America's Pastime
By Christian Bryant
By Christian Bryant
October 26, 2015
The creators of #MuteBuck just wanted to give fans an alternative to Joe Buck, but their broadcast could solve some of baseball's problems.
SHOW TRANSCRIPT

Let’s get something straight: These guys don’t hate Joe Buck. (Video via KSHB)

“We’re not vindictive toward him,” Adam Jones said.

They just don’t think he’s very good at his job.

So dull, in fact, they’re telling Kansas City Royals fans to mute Buck and listen to them instead. (Video via The Dan Patrick Show)

They’ve even gotten the attention of Buck and comedian Rob Riggle, who is a Royals fan.

In starting the #MuteBuck streaming broadcast, Marriott and Jones are giving Royals fans an alternative way to experience baseball games. And that alternative might just be exactly what baseball needs. (Video via KSHB)

Much has been written about the boringness of professional baseball. The games are getting longer, the fans are getting older and younger kids are tuning out.

“Baseball has kind of had an old mindset for a long time. It’s an old sport. It’s got a lot of old, crotchety guys that do the same thing for however many years because it worked,” Marriott said.

Aside from who’s calling the games, who’s watching baseball has been an area of interest for many.

And he ain’t lying. TV ratings for regular season games and the World Series have declined year after year. Many writers and researchers speculate the decline comes from too many games — 162 per team — the rise of regional networks, boringness, etc.

At the same time, podcasts have been increasing in popularity year after year. Luckily for Marriott and Jones, they consider their product is, in Jones' words, “more like a podcast.”

They’re trying to switch it up for baseball fans by calling the games with humor — and alcohol.

“We asked our audience about some drinking game ideas, and I think they were trying to kill us,” Marriott said.

“The one we actually went with was every time there is a Viagra commercial or a Cialis commercial, we had to finish whatever we had in front of us,” Jones said.

“I think we bring a young energy to it," Marriott said. (Video via KSHB)

They don’t have any broadcasting experience ...

“The expectation with us is naturally going to be a lot lower, which is nice,” Jones said.

… but their way of entertaining fans during America’s pastime could be a game changer.

As for the man who set all of this in motion, he’s taking it all in stride.

This video includes images from Getty Images, Patrick Breitenbach / CC BY 2.0 and music "There For Ya" by Birocratic.