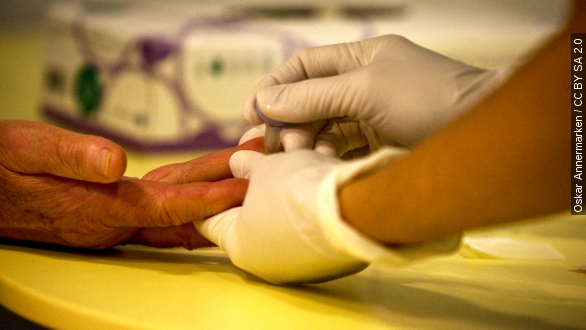 Over the past few decades, genetic testing has opened up new ways to study disease. And while you may be used to hearing "this gene variation raises the risk of this disease," it can also work in reverse. (Video via National Institutes of Health)

A new study on diabetes risk is a good example: An international team of scientists headed by researchers at Los Angeles hospital Cedars-Sinai found a new genetic mutation that seems to lower people's risk of getting Type 2 diabetes by 14 percent.

It's hardly the first mutation found that protects against the disease. Another study last year found a rare genetic variation that lowered Type 2 diabetes risk by a whopping 65 percent.

And there are mutations that can protect against other diseases as well, like heart disease, Alzheimer's and even HIV.

The hope is that these discoveries will lead the way to new treatments, but it's tricky to go from finding the genetic data to learning how to exploit it. (Video via National Institutes of Health)

After last year's study, Pfizer, the drug company which helped fund the research, warned it could take 10 to 20 years to get a new drug to market based on genetic findings.

And the genetic variants can be a double-edged sword, lowering risk for one disease while raising risk for another. For instance, a mutation that protects against HIV was found to make people more susceptible to West Nile Virus.

The researchers behind the new study don't yet know why the mutation protects against Type 2 diabetes, but said it doesn't seem to lower people's risk of obesity.