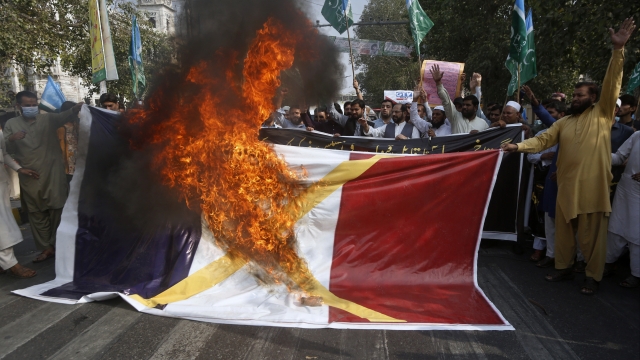 SMS
Muslims In Several Countries Protest Cartoons After Violence In France
By Bailey Vogt
By Bailey Vogt
October 31, 2020
Tensions have escalated between France and Muslim-nations recently after a teacher was beheaded by a Muslim attacker.
SHOW TRANSCRIPT

Thousands of Muslims in several countries joined in protests against France for allowing cartoon depictions of the Prophet Muhammad.

Islamic groups held in demonstrations in Pakistan, Lebanon, Turkey and in Palestinian territories — carrying signs, chanting anti-France slogans and calling the caricatures an insult to Islam.

Tensions have escalated between France and predominately Muslim nations recently after a French teacher was beheaded by a Muslim attacker on Oct. 16 for showing cartoons of the Prophet Muhammad in class.

Tensions further exploded Thursday after a man, carrying a Qur'an and a knife, killed three people at a church in the French city of Nice.

Protests turned violent in Pakistan as 2,000 protesters were stopped by police on their way to the French embassy. Some protesters openly called for beheadings and hung an effigy of French President Emmanuel Macron from an overpass.

The images that triggered new protests were originally published by the satirical magazine Charlie Hebdo in 2015 and republished this year. In 2015, gunmen stormed the magazine and killed 12 people.

Despite Muslims considering the caricatures blasphemous and Islamaphobic — Macron has defended the depiction as a French protection of free speech.