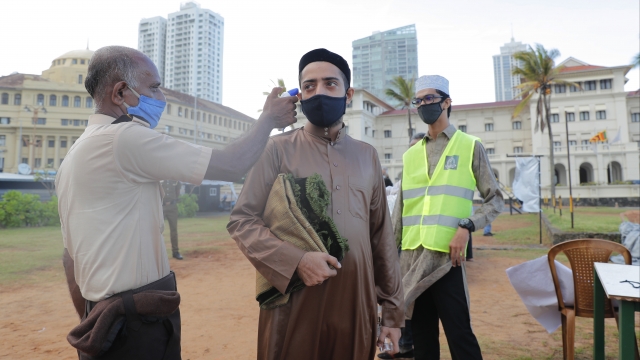 Smaller groups of people performed one of the final rites of the Islamic hajj on Friday in the closing days of the annual ceremonial pilgrimage to Mecca.

Last year, some 2.5 million took part in the Mecca trek in Saudi Arabia. This year, the celebration was limited to only 1,000 people already living in the country. Meanwhile, commemorations worldwide faced challenges from the coronavirus.

The last days of the hajj pilgrimage coincide with the four-day Eid Al-Adha, or "Feast of Sacrifice." Muslims traditionally slaughter livestock and distribute meat to the poor for the holiday.

This year though, the pandemic is pushing millions of people into poverty or economic distresses. Rising meat prices in some areas make holiday feasts unaffordable.

The festival commemorates a story in the Quran of God testing the Prophet Abraham's faith. The story says Abraham was preparing to sacrifice his son in an act of obedience. The Quran says God instead provided him with a sheep or a ram as an offering to spare his son.

Saudi Arabia has the highest number of coronavirus cases in the Arab world, but its health ministry says there have been no cases of COVID-19 among this year's pilgrims.

They were selected after applying through an online portal. Then they were tested for the virus, monitored with electric wristbands, and required to quarantine before and after gathering in holy cities of Mecca and Medina.

The holiday looks different around the world this year. Muslims can't gather in groups larger than six in the U.K. Varied gathering rules in the U.S. have also made for decidedly smaller and more distanced celebrations.