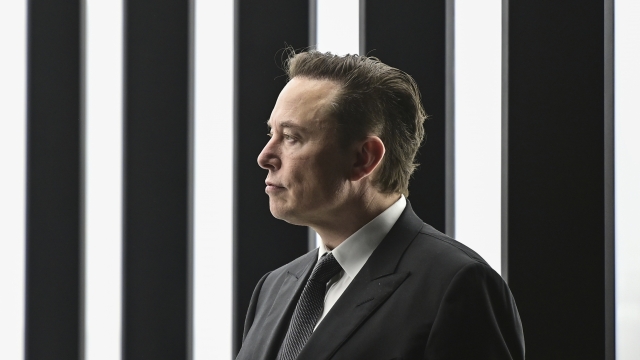 Elon Musk used his Twitter megaphone to appeal to "independent-minded voters" on Monday, urging them to vote Republican in Tuesday's U.S. midterm elections and stepping into the country's political debate that tech company executives have largely tried to stay out of — so their platforms wouldn't be seen as favoring one side over the other.

Musk, who bought Twitter for $44 billion, has expressed political views in the past, on and off the platform. But a direct endorsement of one party over another now that he owns it raises questions about Twitter's ability to remain neutral under the rule of the world's richest man.

"Shared power curbs the worst excesses of both parties, therefore I recommend voting for a Republican Congress, given that the Presidency is Democratic," Musk tweeted.

It's one thing for the CEO of Wendy's or Chick-fil-A to endorse a political party, said Jennifer Stromer-Galley, a professor at Syracuse University who studies social media and politics. It's a whole other thing, though, for the owner of one of the world's most high-profile information ecosystems to do so.

Musk's comments come as he seeks to remake the company and amid widespread concern that recent mass layoffs at the social media platform could leave the company unable to deal with hate speech, misinformation that could impact voter safety and security and actors who seek to cast doubt on the legitimate winners of elections. Though Musk has vowed not to let Twitter become a "free-for-all hellscape," advertisers have left the platform and Musk himself has amplified misinformation.

It's not a secret that when it comes to tech workers and executives, the political mix tends to favor the left, with a good amount of Silicon Valley libertarianism thrown in. Facebook CEO Mark Zuckerberg, for instance has donated to candidates on both sides of the political spectrum, but in recent years he's veered more toward Democrats. Publicly he's stayed away from pledging allegiance to either party.

Elon Musk Emerging As Twitter's Chief Moderator Ahead Of Midterms

The platform's new CEO has positioned himself as moderator-in-chief of one of the most important social media platforms in American politics.

But in their platform policies and content moderation, tech companies such as Facebook (now Meta), Google and even Twitter have taken great pains to appear politically neutral, even as they are routinely criticized — largely by conservatives but also by liberals — for favoring one side over the other.

"Now, you might say, look, Rupert Murdoch owns Fox News and that's his voice amplified," said Charles Anthony Smith, a professor of political science and law at The University of California at Irvine. "But the difference is that gets filtered through a variety of different script writers and on-air personalities and all this other sort of stuff. So it's not really Rupert Murdoch. It may be people that agree with him on things, but it's filtered through other voices. This is an unadulterated direct contact. So it's an amplification that is unrivaled."

Musk's tweets could also stir up trouble in global politics outside of the U.S. elections. On Sunday, the billionaire signaled willingness to explore reversing decisions blocking some accounts of Brazilian right-wing lawmakers. The nation's electoral court last week ordered their suspension; all are supporters of Brazil's President Jair Bolsonaro, who on Oct. 30 lost his reelection bid by a narrow margin, and most had aired claims of election fraud.

Paulo Figueiredo Filho, a political analyst who often defends Bolsonaro on social media and is also the grandson of the military dictatorship's final president, tweeted that Twitter has become a strict and spontaneous censor.

"Your moderators are currently being more dictatorial than our own courts!" Figueiredo wrote.

Musk responded: "I will look into this."

The suspended accounts include that of Nikolas Ferreira, who garnered more votes in the October race than any other candidate for a seat in the Lower House. According to orders issued by the electoral authority, Ferreira's account and most others were blocked for sharing a live video from an Argentinian digital influencer questioning the reliability of Brazil's electronic voting system. The video was largely shared by allies of Bolsonaro, who himself has often claimed the system is susceptible to fraud, without presenting any evidence.

Twitter's policies, as of Monday, prohibit "manipulating or interfering in elections or other civic processes."

In a tweet just two days after he agreed to buy Twitter in April, Musk said that for "Twitter to deserve public trust, it must be politically neutral, which effectively means upsetting the far right and the far left equally."

And to attract the largest possible number of advertisers and users, Big Tech has tried to go this route, with varying degrees of success. For years, it managed to succeed. But the 2016 U.S. presidential elections changed online discourse, fueling the country's increased political polarization.

The article recycled a baseless claim that the personal life of Paul Pelosi, the speaker’s husband, somehow played a role in an intruder’s attack.

In early 2016, a tech blog quoted an anonymous former Facebook contractor who said the site downplayed news that conservatives are interested in and artificially boosted liberal issues such as the "BlackLivesMatter" hashtag. The blog did not name the person, and no evidence was provided for their claim.

But in the explosive political climate that preceded the election of former President Donald Trump, the claim quickly took a life of its own. There was plenty of media coverage, as well as as inquiries from GOP lawmakers, then, later, congressional hearings on the matter. In the years since, as social media companies began to crack down on far-right accounts and conspiracy theories such as QAnon, some conservatives have come to see it as evidence of the platforms' bias.

Musk himself is at least listening to such claims, and he's repeatedly engaged with figures on the right and far-right who would like to see a loosening of Twitter's misinformation and hate speech policies.

Evidence suggests those voices are already being heard. In an October study, for instance, researchers at the University of Pennsylvania found that "Twitter gives greater visibility to politically conservative news than it does content with a liberal bent."

Musk's tweet garnered hundreds of thousands of likes and many retweets Monday on the day before the final votes are cast in thousands of races around the country. But in replies and retweets, many prominent (and not so prominent) Twitter personalities expressed criticism for the Tesla CEO — often poking fun at him. For Smith, that's a sign Musk may not quite be a billionaire political kingmaker that some of his peers, like venture capitalist Peter Thiel, are aspiring to be.

"I wonder if we're we're having the emergence of a new type of billionaire, the ones who want to decide what happens and get credit for deciding what happens," Smith said. "So this more like an oligarchy approach than the old school billionaires who would drop lots of money but then they didn't want anybody to know their names."