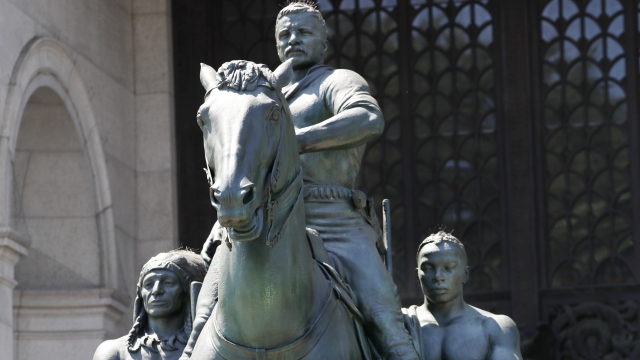 The museum announced it will remove the statue amid criticism​ that it symbolizes colonialism and racial discrimination.

The American Museum of Natural History will remove the bronze statue of former President Theodore Roosevelt amid criticism that it symbolizes colonialism and racial discrimination.

On Sunday, the museum announced it had gotten permission from New York City to remove the statue — which depicts Roosevelt on horseback with a Native American man and an African man standing beside him — from its entrance. It says it believes now is the right time to move it in light of recent events. New York City Mayor Bill De Blasio said the city supports the move, adding that despite what anyone thinks about Roosevelt as a person, the statue "has representations that clearly do not represent today's values."

"The statue clearly presents a White man as superior to people of color," DeBlasio said. "And that's just not acceptable in this day and age, and it never should have been acceptable."

Roosevelt's great-grandson, who is also on the museum's board of trustees, agreed that the statue should be removed, saying in a statement: "The world does not need statues, relics of another age, that reflect neither the values of the person they intend to honor nor the values of equality and justice. The composition of the Equestrian Statue does not reflect Theodore Roosevelt's legacy. It is time to move the Statue and move forward."

But the museum's decision has faced some pushback. In response to the news, President Donald Trump tweeted: "Ridiculous, don't do it!"