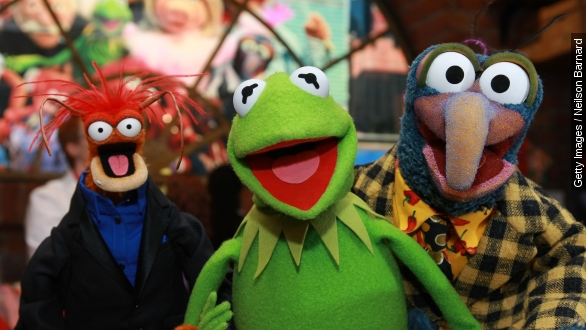 SMS
Muppets Could Return To TV As ABC Eyes 'Muppet Show' Reboot
By Jasmine Bailey
By Jasmine Bailey
April 4, 2015
"The Muppet Show" will reportedly return to TV this year. Here's a look back at some Muppets history in honor of the comeback.
SHOW TRANSCRIPT

It's been nearly two decades since the Muppets have graced the small screen.

And 34 years have passed since we saw Kermit the Frog host the groundbreaking Muppet Show — with the series ending in 1981 after five seasons.

But if the rumors are true we could see a Muppet Show comeback pretty soon.

According to Entertainment Weekly ABC has ordered a pilot presentation  of "The Muppet Show" to air this year. Details haven't been released yet but the show's co-writers will reportedly be Bill Prady, who has worked on with the Muppets in the past and is a co-creator of "The Big Bang Theory," along with executive producer of "Anger Management," Bob Kushell.

Of course the Muppets haven't exactly disappeared. We saw them on the silver screen back in 2011, then again in 2014. Both films were a hit with critics and moviegoers.

But in honor of a return to the small screen, lets take a quick walk down Muppet memory lane.

The Muppets and their goofy antics were first introduced in 1955 on the kid's show "Sam and Friends."

Creator Jim Henson was just 17 years old when he thought up the idea that would eventually become the Muppets — a hybrid of the words "marionette" and "puppet."

According to The Biography Channel, "He didn't know anything about puppetry so he went to the library, we got a couple of books and he made some puppets. ... By his freshman year at the University of Maryland, Henson had his own five-minute show, 'Sam and Friends,' where Kermit the Frog made his debut."

After success on "Sam and Friends" Henson began work on "Sesame Street," which was extremely successful after premiering in 1969.

"The Muppet Show" came to television in 1976 after a number of let-downs from American networks. Oh yeah, in case you didn't know, the beloved Muppets Show actually gained traction in the U.K.

The show lasted for five seasons. Hosted by Kermit, of course, it featured songs, comedy sketches and celebrities. The show also introduced the original Muppet cast and the notorious and tumultuous love affair between Kermit and Miss Piggy.

In 1979 "The Muppet Movie" hit the big screen taking audiences on an adventure as Kermit decided to try his hand in the movie industry.

Even after "The Muppet Show" ended in 1981 the cast continued to star in films and were featured on "The Jim Henson Hour," which only lasted 12 episodes.

The last TV show to feature the Muppets was "Muppets Tonight." It lasted two seasons and lived on through reruns on Disney until 2000.

"The popularity of this cast is attributed to the fact that the characters can be anything. ... As a result, this multispecies cast was able to transcend the issues of race and instead focus on the values of friendship and cultural harmony," WatchMojo reports.

Jim Henson died in 1991 but his creations still live on through his children, who are all puppeteers.  As to when we'll actually be able to see Kermit and the crew return to "The Muppet Show," there's been no announcement yet. Our fingers are crossed it will come soon.

This video includes images from Getty Images and Alan Light / CC BY 2.0.