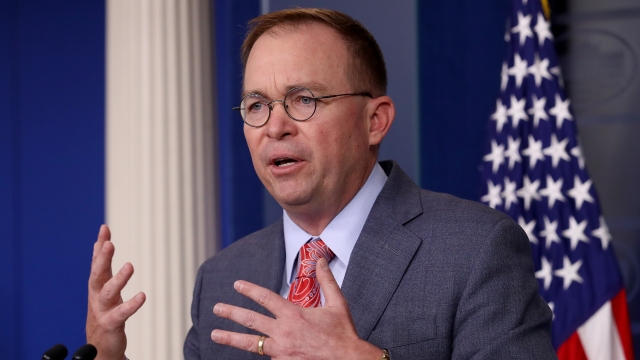 White House chief of staff Mick Mulvaney is walking back a comment he made during a press briefing Thursday that the president held up military aid to Ukraine so that it would investigate Democrats.

In a statement Thursday afternoon, Mulvaney said: "There was absolutely no quid pro quo between Ukrainian military aid and any investigation into the 2016 election. The president never told me to withhold any money until the Ukrainians did anything related to the server."

He also accused journalists of "misconstruing" what he said to "advance a biased and political witch hunt against President Trump."

Mulvaney said the only reason the aid was held up was out of "concern about lack of support from other nations and concerns over corruption."

Earlier in the day, Mulvaney said the Trump administration paused the military aid because President Trump wanted Kiev to investigate allegations that Ukraine hacked the Democratic National Committee server in 2016.

"We do that all the time with foreign policy," Mulvaney said. "We were withholding money at the same time for, what was it, the Northern Triangle countries. We were withholding aid for Northern Triangle countries so that they would change their policies on immigration. And I have news for everybody: Get over it. There is going to be a political influence in foreign policy .... That is going to happen. Elections have consequences, and foreign policy is going to change from the Obama administration to the Trump administration."

Those comments contradicted President Trump's repeated statements that there was "no quid pro quo" during his conversations with Ukraine's president.

Lawmakers were quick to react to Mulvaney's earlier comments. Rep. Adam Schiff, one of the lawmakers leading the impeachment investigation into President Trump, said in a tweet: "Things just went from very, very bad to much, much worse."

Rep. Ted Lieu said Mulvaney's comments were "damning" to the president. He said: "And then Mick Mulvaney today on national TV says, 'Yes, there was a quid pro quo, essentially, on the DNC conspiracy theory investigation.' And so that is all very damning for the president of the United States."