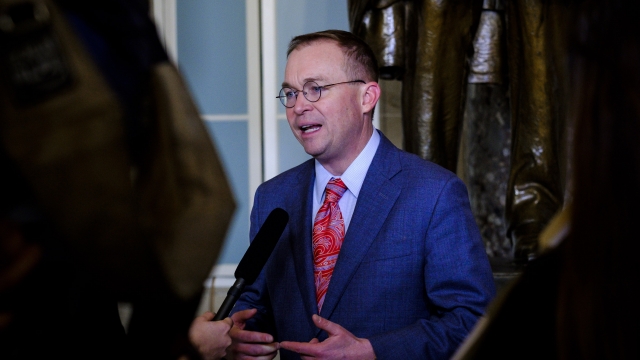 SMS
House Committees Subpoena Mulvaney As Part Of Impeachment Inquiry
By Katherine Biek
By Katherine Biek
November 8, 2019
Despite the subpoena, the acting White House chief of staff is still expected to not show up for the closed-door deposition on Friday.
SHOW TRANSCRIPT

Despite the subpoena, Mulvaney is still expected to not show up for the closed-door deposition.

Lawmakers issued the subpoena two days after they initially invited Mulvaney to testify on Capitol Hill.

The chairmen of the House Intelligence, Oversight and Foreign Affairs committees told Mulvaney in a letter that they believe he has "substantial first-hand knowledge and information relevant to the House's impeachment inquiry."

The White House has directed administration officials not to participate in the impeachment investigation, which President Trump has characterized as another "witch hunt."

The House committees scheduled more than a dozen witnesses to testify this week as part of their inquiry. But as of Friday morning, only two have shown up.