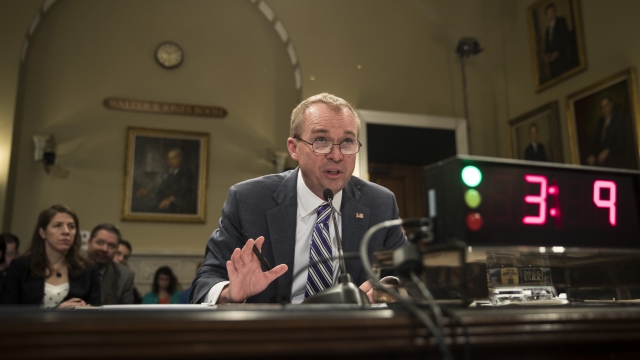 SMS
Mulvaney Asks To Join Lawsuit Over Impeachment Inquiry
By Alec Larson
By Alec Larson
November 9, 2019
The lawsuit is seeking a ruling on whether or not Congress can require President Trump's senior advisers to testify in the impeachment inquiry.
SHOW TRANSCRIPT

Acting White House chief of staff Mick Mulvaney has asked to join a federal lawsuit seeking a ruling on whether or not Congress can require President Trump's senior advisers to testify in the impeachment inquiry.

The lawsuit, filed last month by a former national security aide to President Trump, seeks a definitive ruling on whether the former aide should comply with the subpoena he received to testify before the House Intelligence Committee or comply with instructions from the White House telling him not to cooperate with the impeachment inquiry.

Mulvaney was subpoenaed by Congress earlier this week and ordered to appear in front of the Intelligence Committee, but White House counsel instructed him not to testify on the basis of being protected by "constitutional immunity" that extends to President Trump’s current and former senior advisers.

After failing to appear before the committee Friday morning, Mulvaney made a court filing that night asking to join the lawsuit. His filing said that he is "trapped between the commands of two of [the government's] co-equal branches — with one of those branches threatening him with contempt."

The suit reportedly isn't set to be resolved for weeks, if not longer.