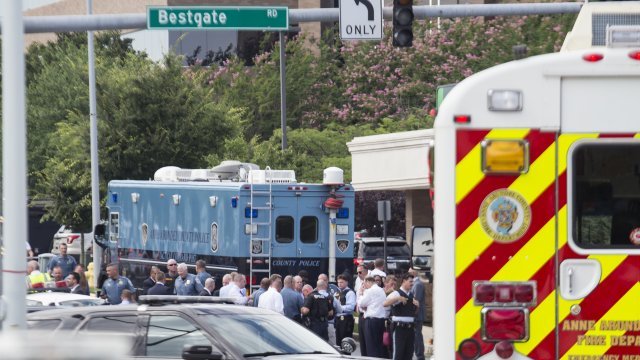 Authorities in Annapolis, Maryland, say the newspaper where a gunman opened fire Thursday was targeted. It's not clear what issue the shooter had with the newspaper. While police said the paper received threats on social media, it's also not clear if those came from the shooter.

Thursday night, authorities named the five people who were killed in the shooting: Wendi Winters, Rebecca Smith, Robert Hiaasen, Gerald Fischman and John McNamara. All of them worked at the Capital Gazette newspaper.

The suspect reportedly didn't have an ID with him when he was arrested after the shooting. Several outlets report he mutilated his fingertips, making identification harder, though a police spokesperson told CNN that's not true.

Police said Thursday night they were preparing to search the suspect's home. They say he lives in Maryland.

A reporter who was in the building during the shooting said there was a single shooter. Police said he used a shotgun. What they initially thought was a potential explosive device in the building turned out to be smoke grenade canisters, according to authorities.

The same reporter posted several tweets shortly after the shooting, including one that said: "Gunman shot through the glass door to the office and opened fire on multiple employees. Can't say much more and don't want to declare anyone dead, but it's bad."

Staff at the Capital Gazette said they would still put out a paper Friday.