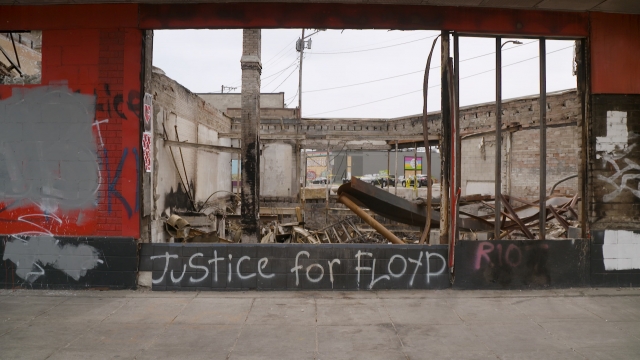 “Ingebretsen's, which is this Scandinavian place where you can buy fish paste, is on the same block as a Mercado, right? I mean, that's what that's what Lake Street was,” said Chris Montana. “What it is now is, depending on where you are, just burned. Fire trucks are still coming back to put out the hot spots from the fire weeks on.”

Chris Montana and his wife, Shanelle, own Du Nord Craft Spirits in Minneapolis. The distillery was one of more than 100 local businesses damaged or destroyed by fires after the killing of George Floyd by a Minneapolis police officer.

“There is no way we are going to survive this. We were going to get hit. And that's exactly what happened,” said Montana. "If this would have burned through -- it didn't, this is still solid — but if it had burned through, this is probably about 1,000 liters of between 190-to-191-proof alcohol."

Montana doesn’t yet know how much the damage will set them back. But he’s already thinking about the future and whether things ever be the same.

“There really isn't a place like Lake Street where you have so many businesses owned by and run by persons of color that add to the overall flavor,” said Montana. “The deck is stacked against Lake Street or any of the areas affected by the riots coming back the way that they were.”

Du Nord is on the same block as the 3rd Police Precinct. The station was the epicenter of the destruction that night. Over 1,500 businesses and residential buildings were damaged or destroyed. That’s according to data published by the Minneapolis Star Tribune.

Many of the places burned were in multicultural business corridors, where the city’s White, Black, Asian and Hispanic populations overlap. Rebuilding will take years, according to Mark Kulda, the vice president of public affairs for the Insurance Federation of Minnesota.

“Member companies that we've talked to have said they've already paid claims. We’re only a few weeks into this and there's already been checks cut, so we do know that people are getting their money,” said Kulda. “But the bigger question is, how do you rebuild in that area?”

“You could drive six miles and you could see signs in 10 different languages,” he said. “And so you hope that it returns in that sort of manner.”

Kulda estimates the losses covered by insurance at about $100 million. Even for businesses with insurance, there may be no buildings left to return to. And after being hit hard by the COVID shutdown, many businesses simply will not be able to bounce back.

“For the business owners of color that I've talked to, I'd say the majority of them have no expectation that insurance is going to cover all their losses,” said Montana. "Many of them carry no insurance. And there are reasons for that. But some of them were just under-insured. When you're under-capitalized, which, you know, typically the business is started by persons of color, have a tendency to be under-capitalized for lack of access to traditional capital. You've got to make choices. And so I don't expect that insurance will do much of anything for those folks.”

What took place in the Twin Cities has happened before: L.A. burned after the beating of Rodney King in 1991. Riots shook D.C. after the assassination of Dr. Martin Luther King Jr. in 1968. In D.C., promised government investment didn’t appear for decades. When it finally came, it sparked rapid gentrification.

“So large swaths of the central business district in almost every Black community in the city were burned to the ground,” said George Derek Musgrove, a historian at University of Maryland, Baltimore County. “What you had, essentially, was cleared land and no money to put anything back on it.”

“So you really don't see any sustained outside investment until the city begins to gentrify in a really significant way in the late '90s and early 2000s,” he said.

Musgrove says unlike D.C., Minneapolis and Minnesota have the political will today to put money into rebuilding. City and state politicians are discussing programs to offer funding for affected business owners.

“As we look at what it looks to invest in the cleanup, invest in businesses, opening back up, to make sure that gentrification of those communities does not happen in a large number,” said Minnesota State Rep. Rena Moran.

After the fires, Montana and his wife turned their warehouse into a community food pantry, and the neighborhood has rallied to support business owners, too.

“Once the money is figured out and the drywall is ripped out and put back up, there is still going to be another Black man dead for no good reason. And that's that's what's going to stick with me,” said Montana. “Hell, even if the Du Nord Craft Spirits as a business was erased from the face of this planet, if what that meant was the conversation would change and some real changes would be made, then that's absolutely worth it.”