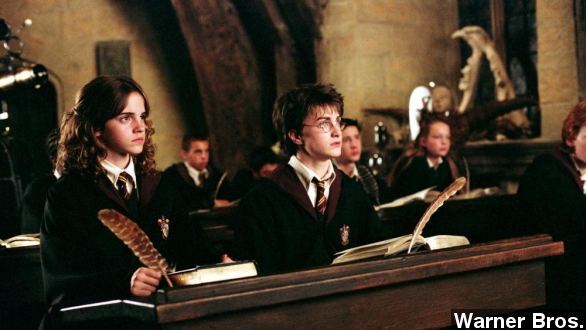 ​Harry Potter super fans no longer have to dream because they can finally attend Hogwarts in real life.

“Welcome to Hogwarts. Now in a few moments you will pass through these doors and join your classmates but before you take your seats you must be sorted into your houses.” (Via Warner Brothers)

OK, so you won’t go to that Hogwarts but now there’s an online version just for Muggles. A group of die-hard Potter fans created a free nine-week online course called HogwartsIsHere.com. Yes this is a real class taught by real professors. And the workload is very real, too.

“You’re expected to complete homework, essays, and quizzes. Along with all of that studying, students can go in chat rooms to talk with other aspiring witches and wizards.” (Via WXIN)

People have been trying to attend Hogwarts for a while now. Back in 2011, CNN even reported on how much it would cost you to attend the fictional school.

“One group calculated how much to go to Hogwarts school of witchcraft and wizardry. More than $43,000 and thats for only one year.”  (Via CNN)

The new school isn’t actually affiliated with J.K. Rowling or Warner Bros., so it’s not an official franchise site.

That would be Pottermore, an interactive fan site where members can follow along with Harry’s adventures, and have a few wizard duels of their own.

But if you’re dying for someone to grade your Defense Against the Dark Arts essay, The A.V. Club advises you to "Hurry up and enroll before Warner Bros. sends out the cease and desist notice.”