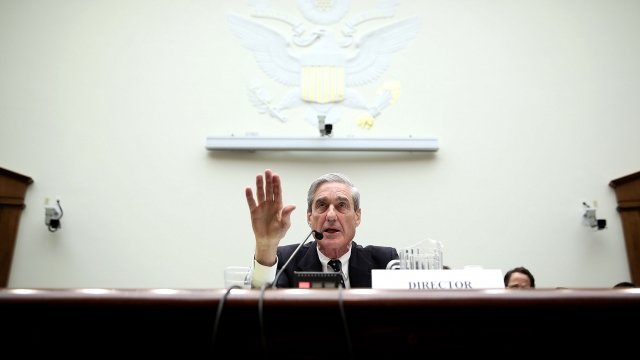 SMS
Mueller Reportedly Raised The Idea Of Subpoenaing Trump
By Katherine Biek
By Katherine Biek
May 2, 2018
The special counsel reportedly discussed issuing a subpoena during a "testy" meeting with the president's lawyer's back in March.
SHOW TRANSCRIPT

The Washington Post reports Mueller brought up the option in a "testy" meeting with Trump's lawyers back in March.

The report came just one day after The New York Times said Mueller has a list of nearly 50 questions for Trump aimed at trying to figure out if he obstructed justice.

That March meeting happened before the president brought on former New York City mayor Rudy Giuliani to serve as a liaison between Trump's team and Mueller's.

Since then, Giuliani's reportedly spoken with Mueller about a possible interview with Trump. Giuliani allegedly told the special counsel that while Trump is still opposed to the idea, a future interview isn't off the table.

The last president to be issued a subpoena while in office was Bill Clinton as part of the Monica Lewinsky investigation in 1998. He ultimately became the first sitting president to testify before a grand jury about his conduct.

If Mueller ultimately issues a subpoena for Trump, it's possible a legal battle would unfold and end with the issue being taken to the Supreme Court.