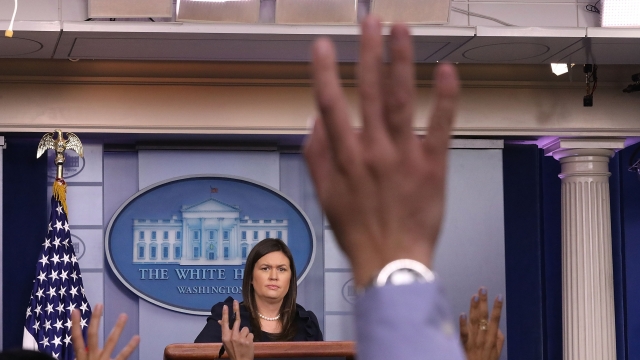 As press secretary, Sarah Sanders is the voice of the Trump administration. But some of the information revealed in the Mueller report calls her truthfulness into question.

One instance explained in the report centers on her characterization of why President Trump fired James Comey.

It's that "rank and file" bit that's not accurate. The press even pushed Sanders on it in the moment, but she held on to her claim.

"So what's your response to these rank-and-file FBI agents who disagree with your contention that they lost faith in Director Comey?" a reporter asked.

Sanders told the special counsel's office that using the word "countless" was a "slip of the tongue". But she apparently slipped more than once. During an interview, she repeated the claim that FBI agents had lost confidence in Comey. She admitted to investigators that her comment wasn't founded on anything and she said she made it "in the heat of the moment."

During that same May 2017 press briefing, Sanders also gave reporters incorrect information about how Comey's job performance review got started.

"But he did have a conversation with the deputy attorney general on Monday, where they had come to him to express their concerns. The president asked they put those concerns and their recommendation in writing, which is the letter that you guys have received."

"So it's the White House's assertion that Rod Rosenstein decided on his own, after being confirmed, to review Comey's performance?" NBC's Hallie Jackson asked.

But they didn't. After the briefing, the report says Rosenstein and then-Attorney General Jeff Sessions both spoke to White House lawyer Don McGahn and raised concerns about what Sanders was saying. According to the report, "The White House Counsel's Office agreed that it was factually wrong to say that the Department of Justice had initiated Corney's termination."

The report details misleading and inaccurate statements from other White House officials, including the president. Since its release, Sanders has defended herself and the administration, pushing back against claims that there's a "culture of lying" inside the Trump White House.