Mudslides Cause Mayhem As It Snows In Paradise 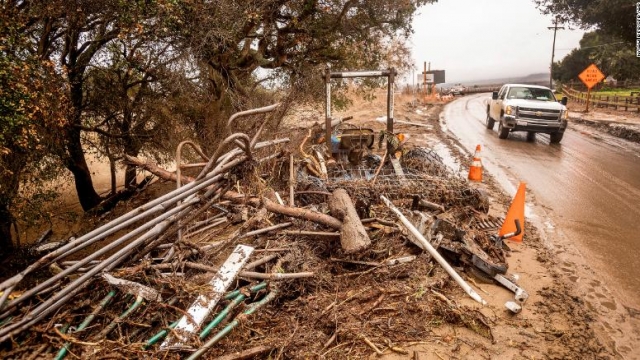 SMS
Mudslides Cause Mayhem As It Snows In Paradise
By Newsy Staff
By Newsy Staff
January 30, 2021
Wintry weather to stretch coast to coast, with snow in Hawaii, mudslides in California and a major storm heading east.
SHOW TRANSCRIPT

"I was in the area when I noticed this section of roadway, specifically the southbound lane had fallen off towards the ocean," said California Highway Patrol officer John Yerace. "This used to be a scenic part of highway one along California’s Central Coast. The roadway is now gone."

This massive crater used to be a scenic part of Highway One along California's central coast.

"It's a big mess and we knew it was probably going to be the messiest time of our life, a lot of cleanup is coming," Christine Kaatz, Silverado Canyon Homeowner, said.

Dramatic rescues caught on-camera, crews pulling a pony and a horse trapped in a massive mudslide.

After being trapped for 18 hours, Capt. Paul Holaday, Orange County Fire Authority said,  "The ground is saturated, it's like a sponge, it soaked up all this water. As it dries it's going to get heavy and then we're going to have concerns about mudslides and flows after that. So just cause the rains gone, does not mean the concern is over."

Days of snowfall in other parts of the state, turning roads into a slick and treacherous place to be, leaving travelers stranded.

"We're trying to get to Homewood it's our first trip of the year and we tried to time it right but it might not be quite right," Venture Nordell, traveling in winter storm, said.

And the wild weather doesn't stop there. This picturesque winter wonderland isn't the Rocky Mountains. This is Hawaii's Mauna Kea Volcano covered in a sheet of snow.