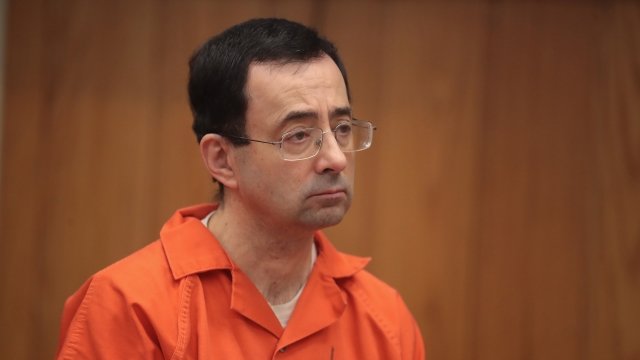 SMS
MSU Reaches $500M Settlement With Larry Nassar Victims
By Katherine Biek
By Katherine Biek
May 16, 2018
Part of the settlement will be held in reserve in the event future lawsuits are filed against Michigan State University over Nassar.
SHOW TRANSCRIPT

Michigan State University has agreed to pay $500 million to settle lawsuits brought against it by victims of Larry Nassar.

Newsy's partners at WXYZ report $425 million will be paid now to the more than 300 survivors who've filed claims. The remaining $75 million will be held in reserve in the event future lawsuits are filed against the university over Nassar.

Nassar used to work at the school as a sports doctor. He's currently serving a 60-year sentence for federal child pornography charges.

In January, a judge in Ingham County, Michigan, sentenced him to 40 to 175 years in prison on multiple criminal sexual abuse charges.

He was later sentenced to 40 to 125 years in prison after pleading guilty to criminal sexual conduct in a different Michigan county. Those two sentences will not begin until he's finished the federal sentence.

The MSU settlement does not include confidentiality agreements or non-disclosure agreements. It also does not cover lawsuits regarding Nassar filed against USA Gymnastics or the U.S. Olympic Committee.