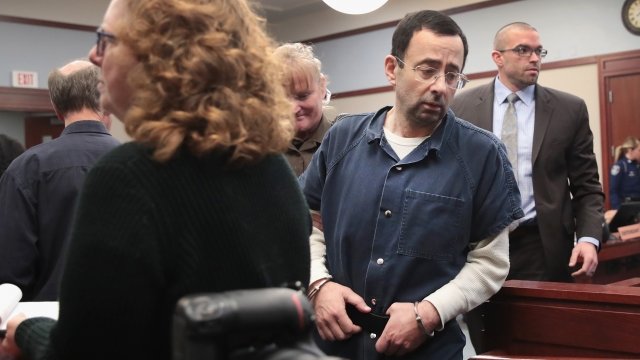 The school is under investigation by the Michigan attorney general's office for its role in the sexual abuse scandal.

During the fallout of the Larry Nassar case, Michigan State University paid hundreds of thousands of dollars to a public relations firm that reported back on media coverage, statements made on social media by abuse survivors and more.

Many media outlets — including Newsy — reported that New York-based firm Weber Shandwick was hired to monitor what these sources were saying, but the firm says that's not an accurate picture of the work it did.

The Lansing State Journal reports the firm sent university staff members breakdowns of news stories and social media posts from Nassar's victims, celebrities, politicians and journalists. It also prepared summaries of how much traction those posts were getting during the case.

Weber Shandwick billed the university more than $500,000 for January, according to documents obtained by the Journal. The firm says it worked with MSU from late December to early March.

For its part, Weber Shandwick says this kind of work is routine. It said in a statement: "As with any assignment, we forwarded to our clients traditional media and publicly available social media pertaining to the horrible tragedy at MSU, including statements made online by the victims. The victims were and continue to be the most important voices in the conversation."

The firm says the bulk of its work focused on "crisis counsel." Newsy has reached out for information about what crisis counsel entails, but Weber Shandwick's website mentions guiding clients to "respond in a timely, appropriate and confident manner" when there are "negative events affecting their reputation."

The editor of MSU's school newspaper told CBS News the survivors "seem to be very upset" about the firm reporting on their social media activity.

Nassar, a doctor who worked for MSU and USA Gymnastics, has been accused of sexual abuse by more than 250 women and girls. He's been sentenced to at least 140 years in prison.