'Mrs. Doubtfire' Sequel? Awesome. But Will It Really Happen? 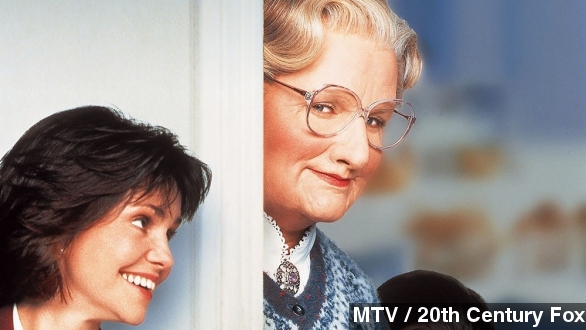 SMS
'Mrs. Doubtfire' Sequel? Awesome. But Will It Really Happen?

By Lauren Zima
April 17, 2014
News a "Mrs. Doubtfire" sequel is in the works has kids of the '90s donning their grandmothers' wigs in excitement, but will a sequel really happen?
SHOW TRANSCRIPT

Nobody saw this coming, but everybody is ecstatic about it if they lived through the '90s and appreciate joy.

Yes, according to The Hollywood Reporter, a "Mrs. Doubtfire" sequel is in the works and the big players are back — star Robin Williams and Chris Columbus, who directed the original, are both attached to the project.

Oh yeah, and the guy who wrote "Elf" is writing the script. (Via New Line Cinema / "Elf")

So far, we're obviously stoked, but admittedly, a touch of skepticism is resting underneath our old-lady wigs.

After all, what will the sequel be about? More than 20 years later, Williams does drag to fool his family ... again? (Via 20th Century Fox / "Mrs. Doubtfire")

Sally Field would never fall for that. And neither would the chick who also played Matilda.

That's Mara Wilson, who, by the way, slammed the sequel on Twitter once the news broke. She tweeted "Mrs. Doubtfire" ended where it needed to end, that sequels "generally suck" and that even if asked, she wouldn't be part of the sequel.

Still, keep in mind Wilson has publicly declared that she's given up acting and says she thinks film acting in general is "not fun." (Via The Huffington Post)

Still, she poses the same question as us, saying she's not sure how the movie could be done again. (Via Twitter / @MaraWritesStuff)

It's easy to see why Fox would want a sequel — with a budget of just $25 million, the movie grossed almost $220 million domestically and another $222 million worldwide. (Via Box Office Mojo)

But The Hollywood Reporter notes a sequel has been in the works on and off since all the way back in 2001, when Bonnie Hunt was hired to work on a script. Many drafts and other writers have attempted since then, but nothing seemed to click for Columbus and Williams.

So maybe this means this new idea is the one they've been waiting for. Or maybe it means once again we're just getting our hopes up about a sequel to a much-beloved movie that will probably never actually happen.

"Ghostbusters III," anyone? (Via IMDb)