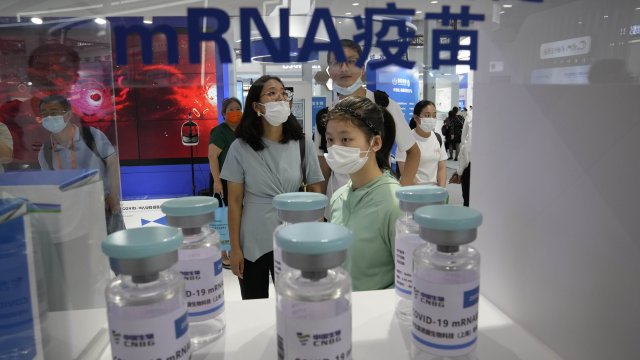 Before 2020, it's likely many had never heard of an mRNA vaccine. The technology teaches our cells to react to an outside threat, like COVID-19.  "Vaccines just happened because of the pandemic to elevate mRNA in in terms of our public psyche and knowledge, but it's a really promising technology for many things," said Dr. Eric Feigl-Ding, senior fellow at the Federation of American Scientists.

Companies like BioNTech and Moderna quickly pivoted the technology for COVID-19, but mRNA vaccines for cancer treatments have been in small trials for nearly a decade.

Though every cancer is different, current trials are underway to use mRNA in the fight against everything from colorectal cancer to melanoma.

Dr. Haidong Dong, a cancer researcher at the Mayo Clinic,  says this could mean personalized vaccines based on specific molecular features of a tumor. The focus would be preventing cancer from coming back after treatment.

"It will be very difficult to prevent [getting] cancer, but it is a hope to prevent the cancer coming back," Dr. Dong said. "That's what we're working for."

One of Dr. Dong's studies showed the mRNA therapy improved the response to other cancer treatments, like a booster. But the use of mRNA doesn't come without challenges.

"Will this be a wonder drug in developing countries? Heck, we can't even get a lot of these pre-mRNA freezers to Africa," Dr. Feigl-Ding said. "It's really difficult, so it becomes, again, an issue of access to privilege."

Dr. Feigl-Ding says he hopes the investments in this technology during the pandemic don't go to waste.

"Hopefully mRNA treatment will come even sooner than it otherwise would have without the pandemic," Dr. Feigl-Ding said.

It’s not just cancer; this technology is being researched for multiple sclerosis, malaria and the common cold.

Doctors with the National Cancer Institute say the research appears promising, but no cancer vaccine has yet been approved by the FDA.

Dr. Dong says it could be years before this is something we see in widespread use, but the trials currently underway are working toward that.