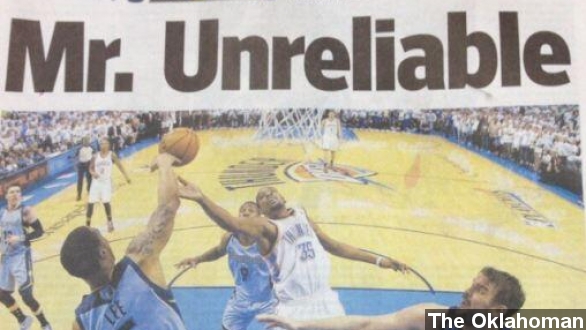 By Jamal Andress
May 1, 2014
Kevin Durant, was dubbed 'Mr. Unreliable' by the OKC Thunder's hometown newspaper, The Oklahoman.
SHOW TRANSCRIPT

Kevin Durant, the face of the Oklahoma City Thunder, four-time scoring champion, five-time NBA All-Star and the presumptive 2014 MVP was referred to as "Mr. Unreliable" by Oklahoma City newspaper The Oklahoman.

The column went on to say: "For six years, Durant has shot foul shots on a string. Mister Automatic. Now he's unreliable. All because the mighty Memphis defense, led by Allen, has knocked Durant from his moorings."

ESPN caught up with KD to ask him about the headline, which he hadn't even heard about.

"Me? Mr. Unreliable, that's what they said? ... That's what they're supposed to write. I didn't come through for the team. ... It's going to be good and bad days. People are going to build you up; they're going to break you down. But it's all about how you stay even-keeled."

The Thunder are down three games to two in their series with the Memphis Grizzlies, and Durant's performance has been spotty. In Game 4, for example, KD only had 15 points and shot less than 30 percent from the field. He also missed a crucial free throw in overtime during OKC's Game 5 loss. (Via Wikimedia Commons / Tim Shelby)

But with an average of 28 points per game, he still has more points total and averages more minutes per game than any other player in the series. (Via Wikimedia Commons / Tim Shelby)

Just hours after the headline was published, Oklahoman sports editor Mike Sherman jumped in to apologize with this tweet and this short column:

But the apology might have been too late for public opinion. Durant was met with almost unanimous support in response to the headline.

USA Today's The Big Lead writes, "Hasn't Durant earned the benefit of the doubt against attack-y covers from his hometown paper?"

And CBS Oklahoma station KWTV responded to the headline with a tweet saying the station respectfully disagrees with the headline.

KD and his Thunder head to Memphis Thursday for Game 6 and hope to avoid elimination. The last NBA MVP to be knocked out of the playoffs in the first round was Dirk Nowitzki in 2007.