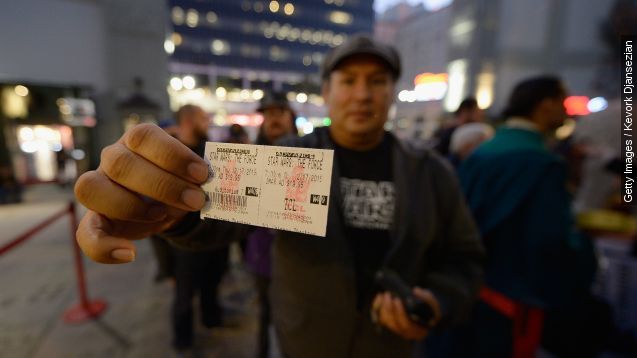 SMS
Movie Tickets Are Pricier, So Is 'Star Wars' Really Breaking Records?
By Katie Link
By Katie Link
January 5, 2016
"Star Wars: The Force Awakens" is breaking records right and left. But is it such a standout when you adjust for inflation?
SHOW TRANSCRIPT

Chances are you've heard of this little movie called "Star Wars: The Force Awakens," and you've probably heard it's breaking all sorts of records.

"Avatar" currently seems to be the film to beat. "Star Wars: The Force Awakens" will battle the sci-fi movie for the titles of top-grossing film domestically and worldwide. "Star Wars" only trails the domestic record by about $20 million, and that's after only a couple of weeks in theaters.

"The Force Awakens" will challenge the worldwide record when it hits theaters in China later this week.

So as movie ticket prices continue to climb, breaking records gets easier and easier. But when you adjust for movie ticket inflation, the records look a little different.

For instance, according to The Hollywood Reporter, the first "Star Wars" movie, "Star Wars: A New Hope," brought in $2.8 billion globally when you adjust for inflation.

But the 1939 blockbuster "Gone with the Wind" continues to reign supreme. According to The Independent, when adjusted for inflation, it's the top-grossing film of all time. Behind that is "Avatar," "Star Wars," "Titanic," then "The Sound of Music."