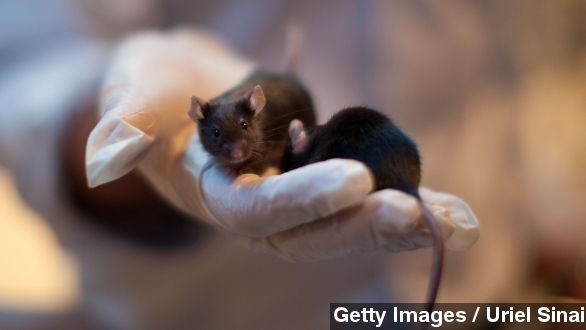 Scientists have found a way to indirectly control a mouse using their minds, but it's for science! And it's not as creepy as it sounds.

First off, they weren't making the mouse perform tasks or actions by thinking it or anything like that — instead what they did was have test subjects activate an implant in the mouse to release certain proteins. (Video via eHow)

The amount of proteins the implant released depended on the brain signals of the test subjects through the use of an EEG sensor, which measures brainwaves. Researchers used Bluetooth technology to transmit the data from the EEG sensor to the implant in the mouse. (Video via Engadget)

The notion was actually inspired in part by a toy called MindFlex, which purports to change the power of a fan that elevates a ball according to the brainpower and concentration of the user. (Video via Marbles The Brain Store)

Although it's not as elaborate as it might seem from the headlines, the study opens the door to a number of possible applications, particularly in the field of medicine.

Specifically, the study says the technology's ability to wirelessly alter the way a gene's information is used "may provide new treatment opportunities in future gene- and cell-based therapies."

In this study, the researchers used Bluetooth, but it's actually building on other studies that used different technology to transmit brain signals.

Earlier this year, scientists used the Internet to transmit brain signals from India to France, where they were used to stimulate parts of the brain and communicate the words "hola" and "ciao." (Video via Channel 4)

The mouse is essentially a temporary vessel for the research, but as The Guardian reports, "Scientists hope it is a first step towards the development of a system that will monitor brainwaves for signs of illnesses and automatically release medicines into the body to treat them."

The researchers said in the future, patients might have to learn how to induce certain mental states to trigger the desired effect.