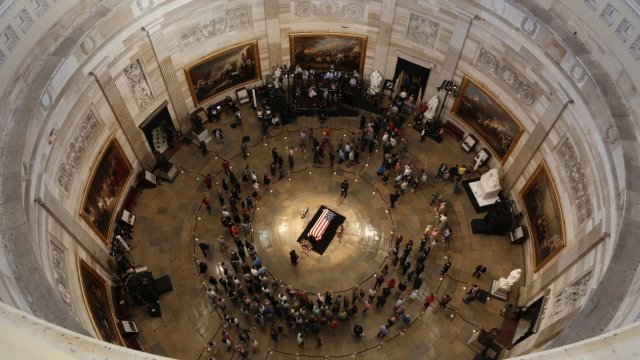 A perfect metaphor described by a true "McCainiac":

"What I saw him to be was a Tootsie Pop. He was hard on the outside and you had to lick down to get to that center middle that was soft, but it was there."

"It was energizing. It was exciting. We had a lot of fun," she said. "He took the time to get to know you as a person."

Today, she finds herself outside the U.S. Capitol with her daughter, Liberty, paying respects to her former boss. She wants her 16-year-old and teens her age to remember the substance of his service to this country.

"The old school are going to remember the hero, the patriot. But what I hope the new generation remembers is the bipartisanship. He wanted us to build relationships to get above and beyond partisanship," Ladd said.

They traveled all the way from Maine to honor him because he also has a special place in their family's history. Christina met her husband because of the senator during the 2000 campaign.

"I was coordinating a press event at the Carter Center," she remembers. "It was an event where local and state House and Senate members who were defecting from George Bush were announcing they were going over to the McCain camp, and that's how my husband and I met."

The memories continued in the next campaign, too. Her daughter Liberty appeared on stage with the senator as a child in 2008. The memories are faint for her — she was only a few years old — but it's the lessons taught by the senator she'll take with her as she enters the halls of Congress.

"I don’t necessarily agree with all his policies or beliefs, but I respect his personality and morals and his bipartisanship, something I hope my generation can learn from even though he was older and from a different time," Liberty Ladd says. "He brought people together that he never agreed with on an ideological scale, but he was friends with them outside the Senate, so he was able to disagree without being disagreeable."

It's a sentiment echoed by teenagers in the lines outside the Capitol on Friday.

"I hold John McCain in very high esteem. Even if we disagree a lot of the time, what he stands for and standing up for what’s right even if he disagrees with his own party or even his own friends is so important in this divisive time in Washington," said 17-year old Zachary Shonfeld. "The friendships he's been able to cultivate across the aisle is a true demonstration of good character and good will for this country."

Shonfeld's going to be able to vote in November. He says he'll remember people like McCain as he casts his first ballot.

"I think it’s important as we head to the polls to look not just at a candidate's policies, but their integrity," he added.

Veteran Kim Stiles, who worked in Congress for 35 years, says he saw in McCain a fellow military man doing his best day in and day out.

"I believe for the most part, McCain had veterans' interests in mind. But not just the veterans, he had the whole country in mind," Stiles said. "I hope his legacy will give people left there incentive to do the right thing, especially when you see the turnout. Right or wrong, I believed John had his country in mind."