9/11 Suspects' Trials Bogged Down By Legal Challenges To Confessions 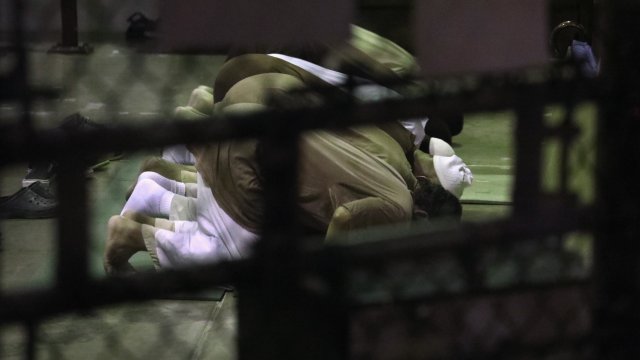 Defense attorneys have challenged the validity of suspects' confessions, which they say were coerced.

Eighteen years after the Sept. 11 attacks, the path to trial for suspects held at the U.S. military base in Guantanamo Bay, Cuba, may be as muddled as ever.

The trial for suspects including Khalid Shaikh Mohammed, the alleged mastermind of the attacks, is set for Jan. 11, 2021. But defense attorneys suggest that court date — already 19 years and four months after the attacks — could be further delayed by exhaustive pretrial motions.

Mohammed's lawyers say he suffered brain damage during his interrogations while in CIA custody. They allege that over four years, he was water-boarded 183 times, deprived of sleep and subjected to other physical abuse.

The CIA delivered Mohammed and 13 other terrorism suspects to Guantanamo in 2006. Five of them, including Mohammed, stand accused of financing and training the 19 hijackers who crashed planes into the World Trade Center, the Pentagon and a field in Pennsylvania.

Back in 2006, military prosecutor Morris Davis pledged he'd seek justice for the 2,976 people killed in the attacks by using a proceeding similar to the ones used after World War II. He said, "I want our grandchildren to look at Guantanamo the way we look back at Nuremberg."

But there's been no Guantanamo proceeding to look back on, and uncertainty continues.

Last summer, a trial judge barred prosecutors from using interviews that the FBI conducted at Guantanamo. An interim judge later said the interviews could stand after a prosecutor argued they offered "the most critical evidence in this case." But yet another judge plans to weigh in on the matter. Hearings are expected to extend well into next year.