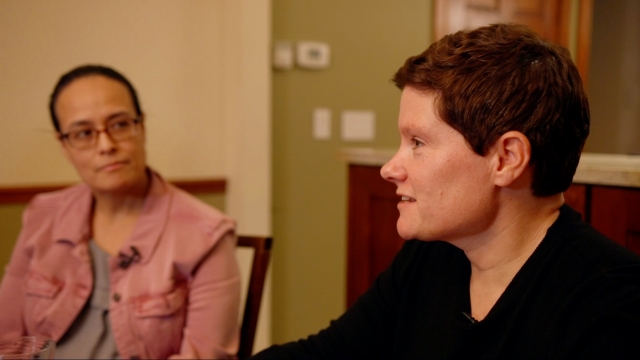 SMS
What It's Like For A Mother With A Disability To Adopt A Child
By Melissa Prax
By Melissa Prax
April 18, 2019
We meet a couple who shares their experience adopting a daughter and what parenting is like with a disability.
SHOW TRANSCRIPT

"I know a lot of other women with disabilities who are parents who do an amazing job. And I just have never really seen an instance where someone's disability keeps them from being a good parent. ... The fact that people with disabilities have had to learn ways of adapting so much throughout their lives actually probably makes us better parents, in a way," said Daisy Feidt, a mother with a disability.

Four years ago, Daisy Feidt and her wife adopted their daughter, Anna.

"I didn't want to birth a baby, and I think you ... ." Berenice Tow said. Feidt responded: "She wanted me to, and I did not want to, so we were left with adoption."

"A lot of people say they sort of lose themselves when they become a mother. I feel more myself than I have ever been as a mom. I mean, I just I cannot believe that we ever were thinking of not being parents, and I'm so incredibly grateful that we made the decision to be parents, and I've absolutely loved it," Feidt said.

There's not a lot of data on how many parents in the U.S. have disabilities. This is partly because what constitutes a disability is somewhat vague, and the little data out there on the topic is based how people self-identify. The latest available data — from almost a decade ago — estimates there are 4.1 million parents with disabilities.

"I think a lot of people wonder whether or not people with disabilities can even have kids or what the issues might be if you have kids. We definitely, kind of immediately, when we started the adoption process were confronted with the issue. I had to get my doctor to say that I would be an OK mother. ... My doctor was like, 'Is there anything I should be concerned about?' And I was like, 'I don't think so. But they need me to get you to sign off on this.'"

"I feel like, actually, [with] the process [of adopting] a child, my disability has came up way more than once I've actually had a child. Even in the [adoption] process of, you know, being connected with birth mothers, I was definitely concerned about it. We had a profile book — I'm very open about the fact that I have a disability, I work at a disability rights organization — I did not mention it in my profile book because I just felt like it would be a non-starter, like, as soon as birth mothers read that," Feidt said.

Feidt said: "We were already at a disadvantage because [the adoption agency] told us that heterosexual couples get picked first; then couples that are two gay men, for some reason, which was surprising for us to learn; and then two women after that. So we already knew it was going to be hard to start. ... I just chose not to mention [my disability] in our profile book at all, and then when we met Anna's birth mother, I did bring it up. I made sure to bring it up when we first met her. And I don't know — my sense was she was a little bit taken aback by it, but obviously still chose to move forward."

"I don't have a ton of balance, and I was perpetually terrified that I was going to drop her. … I definitely never dropped her, and I've heard of other, like, non-disabled parents dropping their kids. So I think I maybe even did better than you would typically do or something, because I'm so worried about it. But it was definitely a worry of mine," Feidt said.

"People not only have misconceptions about women with disabilities being mothers, but also, like, women a part of the LGBTQ community being mothers. So how have you kind of navigated those intersections?" Newsy's Melissa Prax asked.

Feidt said: "She's very open about the fact that she has two moms, and I think she's starting to understand that that's a little bit of a difference for her, and so when we're out and about she will say, like, 'you know my mama Daisy,' — points to me — 'does this, and my other mom does that.' The other day we were at the zoo and this boy in a family was like, 'you live with two moms?' ... She doesn't get ... . She understands that it's a difference. But she doesn't understand that some people might think of it as a negative or bad thing. And obviously that was that was difficult situation to navigate because he was also just like a little boy, but he was definitely saying it as if it was a negative thing."

"When people see people with disabilities, they really don't understand what folks can do. And they just assume that it's more limiting than it is. And you know, I've seen parents that people would consider having very, very significant disabilities be incredible, incredible parents. It's just it's very rarely any kind of limiting factor," Feidt said.