'It' Holds At No. 1, And 'Mother!' Makes History In All The Wrong Ways 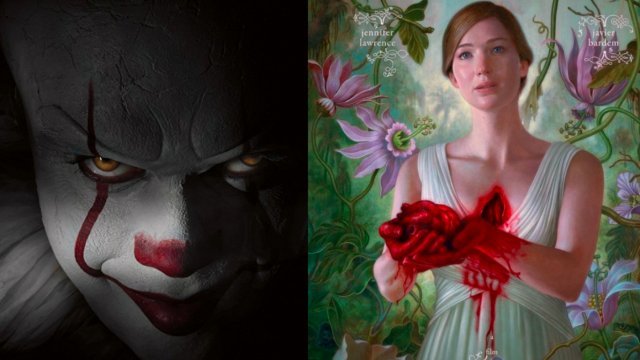 SMS
'It' Holds At No. 1, And 'Mother!' Makes History In All The Wrong Ways
By Jamal Andress
By Jamal Andress
September 17, 2017
"Mother!" earned an F on Cinemascore, which measures audience reception. For context, "Paul Blart: Mall Cop 2" got a B-minus.
SHOW TRANSCRIPT

Easily holding on to the No. 1 spot this week is "It," bringing in an estimated $60 million in its second week out. With such a strong sophomore weekend, the horror movie's 10-day total is $218 million, making it the highest-grossing film released in the month of September, ever.

That pushes it just past the 1986 hit film "Crocodile Dundee," which ultimately grossed $174 million at the box office — though it took a lot longer than 10 days.

Welp, the Maze Runner is all grown up. Taking the No. 2 spot this week is "American Assassin," bringing in an estimated $14.8 million in its debut weekend. Considering this film's budget was on the lower end for an action thriller, costing just $35 million, this is a better-than-expected debut for the folks at Lionsgate.

And while critics have dubbed this your run-of-the-mill action flick, audiences seem to enjoy it just fine. Which is more than I can say for the No. 3 film this weekend.

Taking the No. 3 spot while also assaulting some tweener J. Law fans is "Mother!" bringing in an estimated $7.5 million in its debut weekend. Despite this being a small opening for a relatively low budget film, it's got all the movie nerds buzzing.

To put it plainly, this is an art house film, which by definition is "often experimental and not designed for mass appeal."

And that's probably why this film carries an extremely rare F on Cinemascore, which is purely a measure of audience reception. For some context, "Paul Blart: Mall Cop 2" received a B-minus. Only a dozen or so films have gotten a collective F from moviegoers in modern times.

The director, Darren Aronofsky, has achieved mainstream success before, most notably with "Black Swan," which won an Oscar and managed $329 million worldwide.

Unfortunately, "Mother!" doesn't seem to be headed in that direction with such a small debut and a strong rejection from the average moviegoer.

As for next week, remember that time Halle Berry downed a pint of whiskey on stage? This is the movie she was promoting.