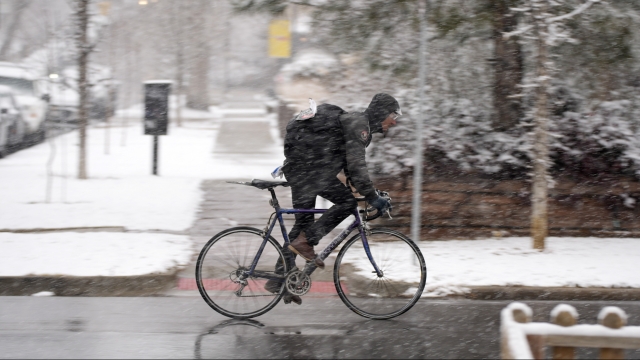 A snowstorm pushed across the country over the weekend, and another one looks to be on the way.

There are blizzard conditions in Fargo, North Dakota, and the Upper Midwest, with wind gusts clocking in at 60 miles per hour creating whiteout conditions on the roads and closing down some of the interstates. Cars were abandoned along the sides of the roads as the blowing snow created dangerous driving conditions.

The snowstorm caused serious travel problems in Michigan. More than 100 cars piled up on the interstate in Farmington Hills near Detroit.

Just hours after setting a high temperature record of 61 degrees at John F. Kennedy Airport in New York City, residents woke up to a blanket of snow. The snow was falling so quickly in Central Park in Manhattan that it was hard to see.

The snow will stick around. It's going to be below freezing in the Big Apple the next few days, but it will hit the 60s by the end of the week.

At this time of year when winter and spring start colliding, roller-coaster temperatures and severe weather build.

This system and storm up in the Pacific Northwest will be dropping South, and it's going to bring snow and ice to the Upper Midwest and Great Lakes Tuesday through Thursday. And below it in Texas and the Gulf states, there will be strong thunderstorms and possibly some tornadoes.