More U.S. Troops Deployed To Europe In Response To Russia 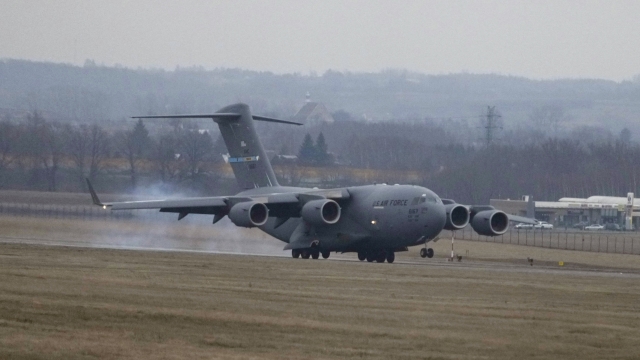 SMS
More U.S. Troops Deployed To Europe In Response To Russia
By Jason Bellini
By Jason Bellini
February 7, 2022
One Major General set up headquarters for some 1,700 additional soldiers President Biden is sending to the 4,500 already stationed there.

Just six months ago, he was the last American soldier to leave Afghanistan as the commander in charge.

Now he's arrived in Poland, 85 miles from the border with Ukraine to set up headquarters for around 1,700 soldiers President Joe Biden is sending to add to the 4,500 already stationed there.

Greeted by a Polish military counterpart, Donahue articulated the mission.

"The deployment of elements of the 82nd Airborne Division are here to enhance readiness, inter-operability across all domains with our Polish allies and, if necessary, defend any portion of NATO," Donahue said.

His troops are in the portion of NATO adjacent to Belarus and Ukraine.

The Kremlin has been moving troops and equipment from Siberia to Belarus for sweeping joint drills, including some Saturday involving long-range nuclear-capable bombers.

Military analysts say in the worst case scenario, there would be a full-scale Russian invasion of Ukraine that would then leave Poland's entire eastern border vulnerable to Russian attack.

Konrad Muzyka is an analyst of the Russian military, based in Poland, who says the infusion of U.S. troops to NATO forces in his country is not enough.

"If there was a Russian attack on Poland, I don't think that — from a military point of view — these forces would actually tip the balance on NATO's favor," Muzyka said. "You definitely need much more than that."

NATO Secretary-General Jens Stoltenberg said Monday that the organization is weighing a more permanent military presence in southeast Europe in response to Russia's "massive military deployment" in and around Ukraine.

"If Russia really wants less NATO close to the borders, they get the opposite," Stoltenberg said.

"This deployment is a prudent measure to ensure collectively the prevention of any war aims," he said.