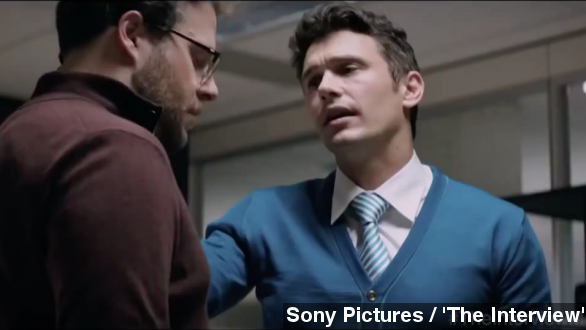 SMS
Multiple Theater Chains Have Now Pulled 'The Interview'
By Lauren Zima
By Lauren Zima
December 17, 2014
At least one theater chain has pulled "The Interview," and the movie's New York City premiere has been canceled. How real are the threats?
SHOW TRANSCRIPT

Threats of terror from the Sony hackers are resulting in real repercussions for the movie "The Interview."

Wednesday Regal Cinemas, AMC Entertainment, Cinemark and Cineplex all decided to delay the movie at their theaters or drop it entirely.

A message sent from the group Guardians of Peace on Tuesday morning threatened attack on the premiere and theaters that show the movie. The threat referenced 9/11.

And Tuesday night, Carmike Cinemas became the first theater chain to officially pull "The Interview" over the threats. According to Deadline, Carmike operates 278 theaters and almost 3,000 screens in 41 states.

Other theater chains are discussing whether to pull the film, which was scheduled for a Dec. 25 release.

Stars Seth Rogen and James Franco have also stopped promoting the movie, including canceling appearances on "The Tonight Show," "Late Night" and "Watch What Happens Live," among others.

"Sony has been 100 percent behind all you guys, behind the film, despite what has been this massive attack — any second thoughts at all?" ABC host George Stephanopoulos asks.

"At this point it's too late to have any, really," Rogen says.

ABC is reporting the Department of Homeland Security says there is "no credible intelligence" of an active plot against movie theaters in the U.S., but the threat can't be ignored.

According to USA Today, "federal officials say they are close" to confirming the source of the hack on Sony.

It's still suspected that North Korea might be involved in the hack, and investigators are considering the possibility of a Sony insider's involvement.

North Korea denied responsibility earlier this month but called the hack a "righteous deed." As for Sony, the financial fallout is growing.

Consider the bad press, the release of details on upcoming projects, the loss on "The Interview" and now lawsuits from former employees over their private information going public.

This video includes images from Getty Images and sebi ryffel / CC BY SA 2.0.