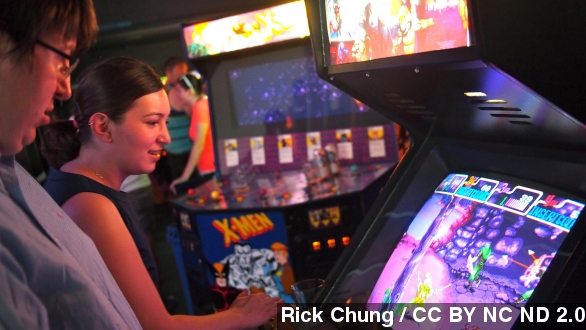 Say goodbye to your productivity. A whole treasure trove of old-school video games is now available for free online.

The Internet Archive, a non-profit that seeks to back up pretty much everything in the entire digital world, has made more than 900 classic arcade games playable in your browser. The site explains, "The game collection ranges from early 'bronze-age' videogames, with black-and-white screens and simple sounds, through to large-scale games containing digitized voices, images and music."

They include a whole host of popular, coin-operated video games from the 1970s through the 1990s, such as Pac Man, Galaga and hundreds you may not have even heard of before. In some cases, the games' controls didn't transfer very smoothly to the keyboard and some files are missing sound, but there are definitely enough working games to keep you entertained for a while.

A writer for Tech Crunch was pretty optimistic the group will work out the kinks, saying, "Just the fact that they got [the emulator] working in a browser, sans any hefty plugin/runtime environments, is damned impressive."

These arcade games are the latest iteration of the JSMESS project, which has already emulated a few dozen retro gaming consoles such as the Atari and Sega Genesis for use in an internet browser

There's no denying it's a cool idea, but freely distributing emulated versions of other people's games does sound kind of illegal. Although some game companies don't often raise a fuss over this kind of emulation, others argue emulation is a form of piracy.

But, as the BBC pointed out the last time Internet Archive published old games, much of this software falls into a "legal grey area" because it's considered obsolete, meaning it wouldn't otherwise be available if not for emulators.

Jason Scott, the archivist who did much of the work on the new Internet Arcade, explained in a blog post that the effort is about software history, and that he hopes members of the public will enjoy the games and some "will begin plotting out ways to use this stuff in research, in writing and remixing these old games into understanding their contexts."

And so far people really seem to be enjoying his work. He tweeted that the Internet arcade is getting twice as many hits as the front page of the Internet Archive website.

The best part about all of this? You never have to worry about running out of quarters.