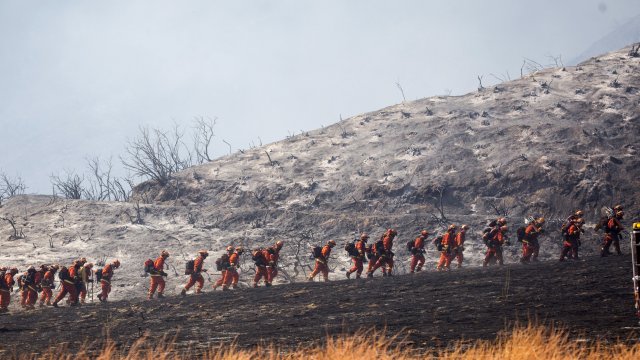 SMS
More Than 200 People Rescued From California Fire
By Alex Arger
By Alex Arger
September 6, 2020
Helicopters were used to lift people to safety from the Sierra National Forest near Fresno.
SHOW TRANSCRIPT

More than 200 campers have been rescued by helicopter after a California wildfire trapped them near Fresno.

Two of those airlifted from the Mammoth Pool Reservoir in the Sierra National Forest were severely hurt and 10 moderately injured. Beginning late Saturday and into early Sunday, Black Hawk and Chinook helicopters were used to carry people to safety.

The wildfire that broke out Friday night threatened at least 2,000 structures and compromised the only road into the reservoir north of Los Angeles. Campers were told to shelter in place until crews could reach them.

A parched California has seen 900 wildfires since August 15, with many caused by lightning strikes. So far, 1.5 million acres have been burned, with eight fire deaths and more than 3,000 structures destroyed.

A heat wave warning hitting triple-digit numbers over much of the state is in effect until Monday. The state's largest utility has warned of cutting power this week to lessen fire danger, as most of California's worst fires have been sparked by downed power lines.