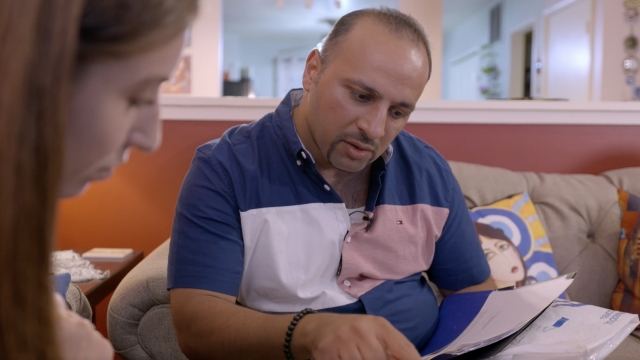 SMS
More Than 20% Of This Year's Refugee Ceiling Is Set Aside For Iraqis
By Austin Landis
By Austin Landis
November 6, 2019
The State Department tells Newsy it's prioritizing Iraqis who worked for the U.S. military as translators, along with their families.

Of the 18,000 refugee admissions slated by the Trump administration for 2020, more than 20% could come from Iraq alone.

The administration designated 4,000 of those spots for Iraqi refugees, including translators for the U.S. military and their families.

A State Department official told Newsy this is the first time the U.S. has established an allocation specifically for U.S.-affiliated Iraqis.

In 2018, the U.S. admitted 140 Iraqis. Fifty-one of them were translators or family members of people who worked for the U.S. government in Iraq.

So why the change? The State Department official said, "Focusing on Iraqis who assisted the United States will ensure that those who sacrificed their own safety to help U.S. national security have an opportunity to seek refuge in the United States."

The decision is potentially life-changing for people like Khalid al-Baidhani, who first worked as a translator for the U.S. in 2006. He said he's immensely proud of working with them.

But Khalid said he was nearly killed because he worked for the U.S. In his first year on the job, he was shot in his face and shoulder outside the military base in Baghdad.

"They feel like you're a traitor or something," Khalid said.

He was admitted to the United States in 2011, but he and his sister are worried for their family, who are still in Iraq.

"I might be a very dark person to say this, but I feel like it's a matter of time before something happens," Khalid's sister, Duaa, told Newsy. "My worst would be kidnapped."

Their father, two brothers and little sister have been stalled in the final stage of the application process, the security check, since 2010. They're four people of about 100,000 similar Iraqis on a waiting list with no end in sight.

But some aren't convinced the new allocation for Iraqis will help. They say the process itself is flawed.

"If at the end of the year we settle 4,000 refugees, then you've got my voice on tape, and I will acknowledge that I was wrong," Eric Schwartz, president of Refugees International, told Newsy. "But I am not convinced we're going to get anywhere near that number, because I'm not convinced that the White House is really serious. Not only about resettlement generally, but about resettlement of these Iraqis."

Schwartz served as the assistant secretary of state for population, refugees and migration under President Obama.

He says the administration took a cue from the Pentagon when making this decision. Just two months before he announced his resignation, Defense Secretary Jim Mattis wrote a memo warning the president about abandoning Iraqi translators.

"The connections between this population and the United States, I do think we have an obligation," Schwartz said.

The State Department told Newsy that the U.S. can't resettle everyone, so they're helping refugees in other ways. That includes more $9.3 billion in humanitarian assistance to refugees in fiscal year 2018 alone.

But some advocates say it's not enough.

"If you pardon my expression, that's just crap," Schwartz said. "The refugee admissions program, even if we were resettling 100,000 — which we should be resettling — is just a small fraction of overall U.S. immigration.”

The new ceiling on admissions, 18,000, is the lowest ever set by the State Department. In his final year in office, President Obama increased the quota to 110,000. President Trump cut that by more than half in his first year in office.