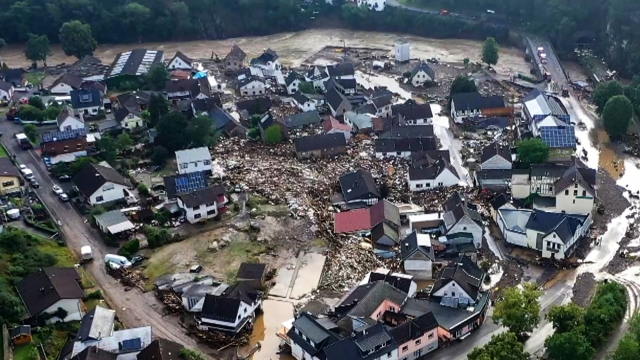 More than 40 people have died and dozens were missing Thursday in Germany and Belgium as heavy flooding turned streams and streets into raging torrents that swept away cars and caused houses to collapse.

“I grieve for those who have lost their lives in this disaster,” German Chancellor Angela Merkel said during a visit to Washington, expressing shock at the scope of the flooding. “We still don’t know the number. But it will be many.”

She pledged that everything would be done to find those still missing, adding: “'Heavy rain and flooding' doesn’t capture what happened.”

Among the worst-hit German villages was Schuld, where several homes collapsed and dozens of people remained unaccounted for.

Rescue operations were hampered by blocked roads and phone and internet outages across the Eifel, a volcanic region of rolling hills and small valleys. Some villages were reduced to rubble as old brick and timber houses couldn't withstand the sudden rush of water, often carrying trees and other debris as it gushed through narrow streets.

Karl-Heinz Grimm, who had come to help his parents in Schuld, said he had never seen the small Ahr River surge in such a deadly torrent.

Dozens of people had to be rescued from the roofs of their houses with inflatable boats and helicopters. Germany deployed hundreds of soldiers to assist.

“There are people dead, there are people missing, there are many who are still in danger,” the governor of Rhineland-Palatinate state, Malu Dreyer, told the regional parliament. “We have never seen such a disaster. It's really devastating.”

In Belgium, the Vesdre River spilled over its banks and sent water churning through the streets of Pepinster, near Liege.

“Several homes have collapsed,” Mayor Philippe Godin told RTBF network. It was unclear whether everyone had been able to escape unhurt.

Major highways were inundated in southern and eastern parts of the country, and the railway said all trains were halted.

In Liege, a city of 200,000, the Meuse River overflowed its banks Thursday and the mayor asked people living nearby to move to higher ground.

European Union Commission President Ursula von der Leyen pledged to help, tweeting: “My thoughts are with the families of the victims of the devastating floods in Belgium, Germany, Luxembourg and the Netherlands and those who have lost their homes."

The full extent of the damage was still unclear, with many villages cut off by floods and landslides that made roads impassable. Videos on social media showed cars floating down streets and houses partially collapsed.

Many of the dead were only discovered after floodwaters receded.

Authorities in the Rhine-Sieg county south of Cologne ordered the evacuation of several villages below the Steinbachtal reservoir amid fears a dam could break.