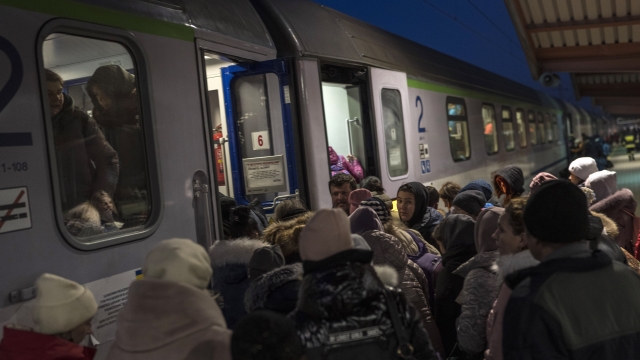 SMS
More Than 2.6 Million Refugees Have Fled Ukraine
By Ben Schamisso
By Ben Schamisso
March 13, 2022
Ukrainians are fleeing their war-struck country to neighboring countries like Poland, Hungary, Slovakia and others welcoming hundreds of thousands.

Ukrainians trapped in besieged cities are making desperate runs for safety — crossing over wreckage with their belongings on their backs and their pets in hand.

Their goal is to get to the nearest train station before the next Russian strike.

The United Nations High Commissioner for Refugees, or UNHCR, says more than 2.6 million refugees have fled Ukraine since Russia’s invasion — the largest exodus of people in Europe since World War II, with many more expected to follow.

Most of them are women and children, since Ukrainian men aged 18 to 60 can’t leave the country.

“I believe that kids shouldn't see the murder," Maria Bokova, a mother and refugee from Kyiv, said. "They shouldn't hear the bombs falling on their city."

Over 1.6 million have already entered Poland.

“Poland is a country of 38 million," UNHCR spokesperson Matthew Saltmarsh said. "That is a huge number for a country like this, but the welcome that has been shown by the Polish government, but also by civil society, is absolutely amazing.”

Besides Poland, other neighboring countries like Hungary, Slovakia, Romania and Moldova are welcoming hundreds of thousands of refugees, with Russia taking in roughly 100,000 people from breakaway regions in eastern Ukraine.

Further west, European countries like Germany and the Czech Republic are also receiving tens of thousands of Ukrainians.

Once in the European Union, Ukrainian refugees are allowed to move freely, and under a European Union emergency plan, they can swiftly start working and receiving social benefits.

The rapid and coordinated EU response is a far cry from how the 27-nation bloc has been handling recent migration waves from Africa and the Middle East.

Countries like Poland and Hungary, which closed their doors on migrants in the past, are now changing tack to allow mostly Christian Ukrainians.

Beyond the European Union, Israel says it’s ready to welcome over 100,000 Ukrainians, including Jews who are entitled to citizenship under the country’s law of return.

In the U.K., Prime Minister Boris Johnson is under fire for not lifting visa requirements for Ukrainian refugees.

“We are going to be as generous as we can possibly be, but we must have checks," he said.

"The United States is absolutely prepared to do what we can and what we must," Vice President Kamala Harris said.

The White House says it’s “prepared” to accept Ukrainian refugees but says for now they appear to want to stay in Europe.

The Biden administration has provided over $100 million in food and other assistance to people inside Ukraine — where millions remain trapped.