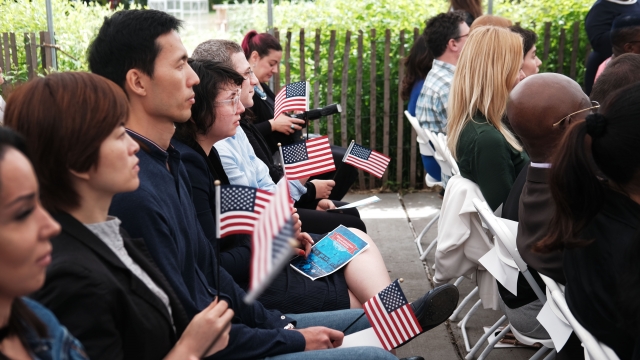 California, along with Oregon, Pennsylvania, Maine and the District of Columbia, is suing the Trump administration over its new "public charge" rule.

California Attorney General Xavier Becerra filed the lawsuit on Friday. That was less than a week after the administration issued a final rule that would make it easier to deny immigrants entry into the U.S. or change of immigration status if they're deemed "likely" to use a wide range of public benefits.

The suit argues the new policy "will disproportionately block admission of non-white, non-European immigrants," that it "punishes immigrants for participating in widely used public benefits programs," and "interferes with the states' rights to protect their residents."

Becerra said in a statement: "This cruel policy would force working parents and families across the nation to [forgo] basic necessities like food, housing, and healthcare out of fear. That is simply unacceptable. We will fight this unlawful rule every step of the way."

California Gov. Gavin Newsom also criticized the rule in a statement, saying: "This latest move by the federal administration to demonize immigrants is personal for us, in a state where half of our children have at least one immigrant parent. This new rule, designed to create fear in immigrant families, is cruel and threatens our public health. We're standing up to the Trump Administration in court to protect our economy, our families, and our most sacred values."

The suit was filed just two days after 13 other states also sued the Trump administration over its changes to the "public charge" rule.