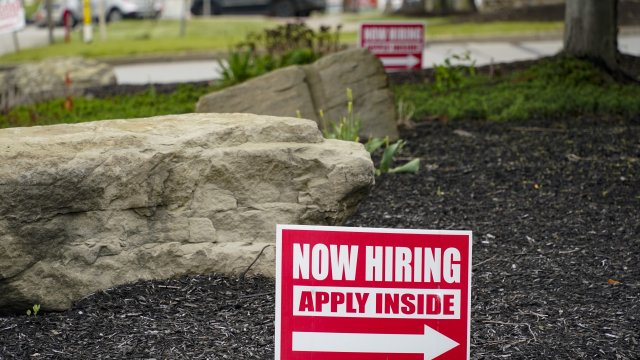 Several states are now offering incentives for people to return to work. In Oklahoma, it's $12,000. In Connecticut, a $1,000 signing bonus.

And these are limited-time offers, like a special you'd see on an infomercial. The first 10,000 or 20,000 workers to take the offer get it. If you wait too long, no bonus for you. It's an effort to force people from the sidelines — get them off of unemployment benefits — and on to regular payrolls.

“I would be lying to you if I said we had no worries this labor shortage is a huge, huge concern," said Steve Chucri, president of the Arizona Restaurant Association.

Arizona is one of many states where business owners say they can't hire enough workers. That's despite the fact that the industry is down nearly two million jobs from pre-pandemic levels, according to the National Restaurant Association.

In Texas, more than half of service industry executives say they're trying to hire workers. Four in ten of those executive said continuing unemployment benefits are to blame. But there might be more going on here.

"I think this pandemic is an opportunity for restaurant workers and owners to look at the industry and assess the way workers have been treated so poorly in the past," said restaurant worker Rosa Kovacevich.

Some restaurant workers are complaining, saying they don't get health coverage on the job. No sick time either. Wages are low, along with unpredictable schedules. And for workers with kids, worries about childcare.

"When employers say 'I can’t find all of the workers I need to hire,' the rest of the statement is really — 'at the wage I want to pay,'" said Michael Shields, researcher at Policy Matters Ohio.

But restaurant owners have been struggling for over a year now. They can't afford to offer workers more money without passing the cost onto us. For example, take a chain of 17 restaurants across northeast Ohio called Winking Lizard Tavern. They have 200 open positions right now.

"I need about 10 managers. I need cooks, servers, bartenders, dishwashers, you name it, we need it. Capitalism is a great thing, but you can’t compete against the government, right? We’ve got to figure that one out," said co-owner John Lane.

The Biden administration says if someone is getting unemployment benefits, they have to take a suitable job if it's offered. But the Chamber of Commerce wants the benefit to end. It says one in four unemployed workers are making more money now than they did when they were working.