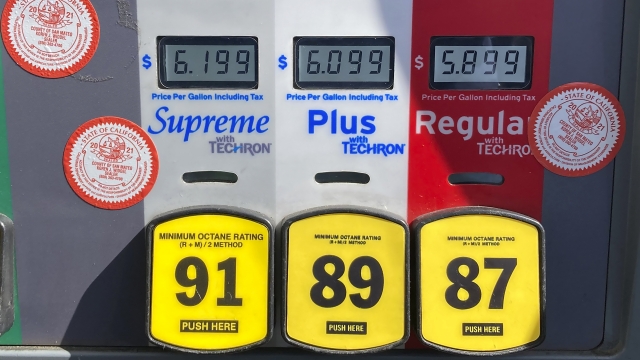 SMS
More States Consider Suspending Gas Tax As Prices Rise
By Isbella Diaz
By Isbella Diaz
March 15, 2022
Drivers in some places are crossing state lines to get a little relief.

It's the question on everyone's minds: When will gas prices fall back down?

"I only put $7 in, man. Know what I'm saying? You gotta get what you can get," Maryland driver Shawn Lomax said.

Drivers in some places are even crossing state lines to get some relief.

"It's only a 10-minute drive to save 50 cents, sometimes 75 cents a gallon, so it's worth my while," said Mike Phillip, an Illinois driver in Wisconsin.

Lawmakers across several states are trying to help.

In Georgia, that would drop the price of a regular gallon of gas by 29 cents through the end of May.

Republican lawmakers in Pennsylvania have proposed a suspension of their gas tax, which is currently the highest in the nation (more than 57 cents a gallon).

And in Florida, state legislators have already approved a month-long, gas tax holiday, dropping the price by about 25 cents — but not until October.

Several governors are also calling for the federal government to suspend its gas tax through the end of the year.

But House Speaker Nancy Pelosi isn't on board, noting the federal tax is only about 18 cents per gallon.

"There is no guarantee that the oil companies pass that reduction on to the consumer. And it's very hard to write a bill that requires them to pass it on to the consumer," she said. "You think that it's at the pump, it's the consumer paying it, comes off, but that's not the way it works."

And some state lawmakers opposed to a tax holiday say it could do more harm than good.

"The reality is that you have to watch it," Maryland state Sen. Cory McCray said. "You have to first look at how much revenue is going to be lost from us waiving this gas tax."

The good news is the price for U.S. crude oil is sliding. A barrel of U.S. crude fell below $94 at its lowest Tuesday, which was down from a high of nearly $124 just last week.

But that change is slow to make its way to our local gas stations.

"Any difference is a difference but at the same time I feel like that's just something to ease our minds knowing that we're paying more than we expected to pay on a regular basis," said Maryland driver Daquam Knight.