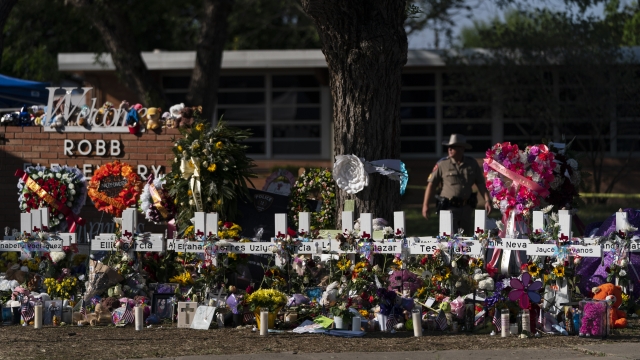 Families broken by the school shooting in Uvalde, Texas want answers to a question asked in the first moments of the attack.

In Texas, school districts have police forces which operate independently of city police.

Robb Elementary had its own officers through the Uvalde Consolidated School District Police Department and its chief was calling the shots during the teenage gunman's rampage. A state official said the chief ordered officers to wait for backup and equipment, leaving students inside the school with an active shooter for more than an hour.

"From where I'm sitting now, of course it was not the right decision. It was the wrong decision period. There's no excuse for that," Texas Department of Public Safety Director Col. Steven McCraw said.

Mickey Gerdes was president of the school board as the district police force formed in 2018. He tells Newsy they used to hire Uvalde city police to protect the schools. They worked mostly at the junior high and high school, dealing with minor incidents like cigarette and weed use. A chain link fence and locked gates had sufficed at Robb Elementary. But the board ran into scheduling problems and requests for additional funds. So, they decided to build their own independent police force.

"When Chief Arredondo was hired in 2020, he came with well over 20 years' worth of law enforcement experience," Gerdes said. "He is a hometown boy. He grew up here and graduated from high school here. And I know he had been in Laredo and was looking forward to trying to get back to the Uvalde area and to be back with family and his hometown."

Before the shooting spree last week, Police Chief Pete Arredondo had overseen a team of five. Newsy is told that local law enforcement heeded his order to wait. But members of the elite Homeland Security unit that killed the gunman overrode the police chief, storming the classroom. Still, precious time was lost.

"There were several of these kids that died because they bled out or that, you know, they couldn't get them to the hospital in time. And that delay, I mean, 150% sure that that caused more casualties than it needed to be," Gerdes said.

Senior law enforcement sources tell Newsy Arredondo is no longer cooperating with the state's investigation: That he was initially interviewed but did not respond over the weekend to an additional interview request. But he says he is complying.

"Just so everybody knows, we've been in contact with DPS every day, just so you all know. Every day," Arredondo said.

It's unclear whether Chief Arredondo even had a police radio to hear about the desperate calls for help from children at the school.

Lending to the confusion, officials have revised accounts of what happened in a constantly shifting timeline.

Uncovering what went fatally wrong, which resulted in the deaths of 21 people, including 19 children is now falling to the Department of Justice, at the request of Uvalde's Mayor.